Life, Liberty and the Pursuit of Anything 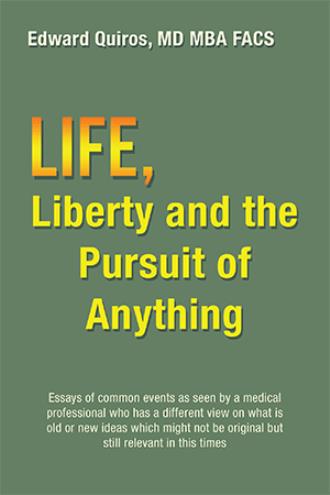 I am not a writer or an author of novels or essays. It always discourages me to see so many authors or writers, some established, others just attempting to make a name for themselves every time I enter a bookstore and see thousands and thousands of titles of novels or books or whatever the writer thinks it is worth writing about. Some are new editions, others neatly arranged in that heap called bargain purchases. It immediately put a stop to my idea of putting what I think is a subject that must be indelible, of everyday events that people talk about after seeing it on TV or coming across it on a page of a local or national newspaper. Something like Charles Krauthammer’s seminal essays in Things That Matter, Andy Rooney’s astute observations in Common Sense, or the provocative articles in humorist Dave Barry’s I Am Not Making This Up. But growing older in age and with the remaining future not so distant anymore, the impulse and the courage to tell anyone who is interested in what you have to say becomes compulsive as magma wanting to erupt from the bowels of the earth’s core. That is why these essays compiled and culled from the files of what I have kept these years writing editorials in magazines, from applications to a graduate school I never finished and received a diploma, and from other sources the names I can’t recall, from recent and contemporaneous events onerously repeated by pundits and so-called experts, became bound in a form you are holding today. The ideas may be past but still relevant. They might be current and dissecting them with the pros and cons of opinions providing the diversity we strive for. I do not claim originality in the subjects I write about. They might not be original, but I have burnished them with a different patina the reader never thought of colorizing. The research of some of the data was done via websites, different articles read, speeches made, my notes and recollections, and some older versions of articles I have written in some newsmagazines. For privacy reasons, I have changed the names in one essay in particular, as I was not successful in communicating with the persons despite attempts at doing so. I have also, to the best of my ability, adhered to the fair use doctrine using some data or quotations in some of my essays. In any case, I hope it is while your time, effort, and your trip to the bookstore to come up and peruse what is in your hands.