Fresh Yankee and Men She Knew 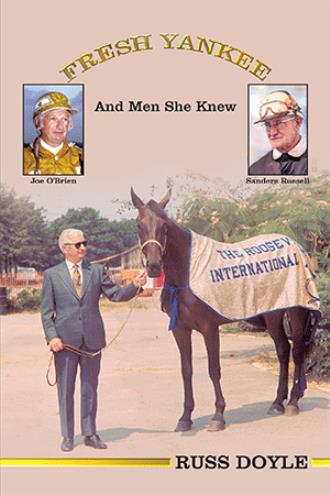 Trainer Sanders Russell was scouting possible candidates for the next day's sale when he breezed past hundreds of yearlings lining the aisles at the Harrisburg Auditorium, where the annual sale of Yearlings was being held in the first week of November, 1964. Russell was entrusted to fill an order for Duncan MacDonald of Sydney, N.S. who wanted to purchase a yearling colt or filly, a trotter or pacer, for $1,000 or less, at the annual Harrisburg Yearling Sale in Harrisburg, PA. Russell and his trusty stable-hand "Wimp" McAllister were breezing through the aisles of sales candidates that were presenting the action come the next day's sale. It was a stop-and-start procedure Russell had in place. He skimmed past open stall doors, and should the horse inside strike his fancy; he would make mental notes to discern whether he or she required another look at the time of his or her appearance in the sales ring. While passing the Yankeeland consignment, Russell paused to peek at a filly that caught his eye. He peered into the stall, and quickly wheeled away without commenting. Sidekick McAllister was peering into the same stall and was left questioning why his leader would even consider the small filly, having “donkey’s ears.” It was from ringside on sales’ day that Russell did his main assessment. The bidding opened at $500, jumped to six hundred dollars and by the time it reached $700, seemingly there was a notable paucity of interest. The bid master trilled his way for many seconds before arousing $50 increments to the point where interest was obviously waning with the bid seemingly stuck at $850. Meanwhile, MacDonald's advocate (Sanders Russell) was keeping his powder dry. He listened intently while the auctioneer warbled and trilled his way toward attracting another bid that may not be coming. In the matter of seconds - that seemed like minutes – Sanders finally raised his hand for $900. The auctioneer thanked him for his bid and continued with his trilling. Soon, after seeing the bidding faltering, the bid taker slowed to a halt, cut his trilling, and dropped the hammer. The $900 bid was an offer the auctioneer quickly approved. He slammed down the gavel, waggled his finger at the veteran horseman whose timely bidding was every bit as astute as it would have been, had he been ‘shooing’ a horse to the finish line. An unfortunate aspect in Fresh Yankee's overall career was her lack of opportunities to compete in most of the major Stakes’ events. She had success in a lot of 'County Fair Stakes’ in her two-and-three-year-old years, but purse money in those events were pedestrian compared to the top dollars available to horses eligible to compete in major Stakes events. It couldn’t be expected $900 horses be 'staked' to the hilt. It costs big money to participate in staking yearlings. Horse buyers at the lower end, are not anticipating being involved in stakes events. It is usually the preserve of colts and fillies representing top bloodlines and larger purchase prices. Thus, it was for Fresh Yankee's Cape Breton owners. The original idea in Fresh Yankee’s purchase was that she would provide the purchaser - Duncan MacDonald - a horse for him to break, train and otherwise enjoy as a winter pastime project near his home in Cape Breton. Once it became apparent Fresh Yankee would not be coming to Cape Breton, the prospect of staking her in different events for which she was eligible in the United States was raised with the owners by trainer Russell. In later years, Russell was to explain why he outlined the modest stakes program for the filly. He said he was guided by the limited expectations her owners had for her. "Racing for big money is what professional trainers do," Russell told me. Naturally" he said with a smile, "I would have preferred the filly be listed for all the major stakes. But the reality was my clients hadn’t purchased her with the intent of being involved in the Stakes program and didn’t want to put up the big dollars it costs to participate. "For that reason, I cobbled together a modest staking program that involved County Fairs and lesser-known stakes at different racetracks throughout the area where I would be racing. As you now know, they accepted that proposition and we did darn well in some of those stakes even though the purse money was not of the proportions offered by the larger tracks," he added. "It would have been nice to have some of the bigger events included, but that's a case of hindsight. We can all see now she was a better horse than we anticipated. The reality is we didn't take that road, and I'm sure none of us now are about to beat ourselves up for not having made that decision." The question of the proverbial ‘what if’ most often surfaces around the Hambletonian Stakes race. The Hambletonian Stakes is the most venerable of the competitions offered to three-year-old trotters. In those years, the event was staged at the DuQuoin Fairgrounds in Illinois and usually involved the top bred horses from that age and gait. Since moving from DuQuoin in 1980, The Hambletonian has become the premier event at The Meadowlands racetrack in East Rutherford, New Jersey. The Hambletonian Trophy is one of the most sought-after Pprizes in all of the harness racing sport. The event itself is named to honor the Thoroughbred stallion “Hambletonian” who was born on May 5, 1849 in Sugar Loaf, New York and through his proficiency as a stallion went on to become the foundation sire for the Standardbred breed.

Fresh Yankee Is about Standardbred racehorse and the individual men involved in her fascinating journey to great stardom as she becomes the first Standardbred horse to win a million dollars in prize money in North America. The book provides intriguing entertainment as the author pulls back the curtains for a glimpse into the challenging, and often passionate, interpersonal relationships among the men who owned, trained and drove Fresh Yankee. Readers will have a ringside seat as the bidding to purchase the immature Fresh Yankee takes place, and her life towards development begins. Those who are racehorse enthusiasts interested in bloodlines, breeding, care and training, as well as, historians interested in family histories and animal lovers will find great satisfaction in what the author desires to impart.