Faith in War the Soldiers Bible 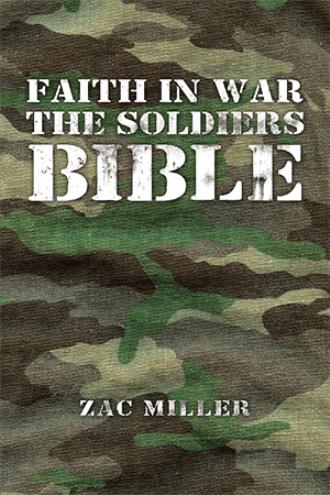 Faith in War the Soldiers Bible is a true story that takes place from 1967 through 2019. It is the first hand accounts of 7 U.S. Army combat veterans. These veterans fought in Vietnam, Iraq, Afghanistan and Syria. Combined these veterans have 11 combat tours between them. Some of the awards they amassed on these tours include 3 bronze stars with V device for valor, 2 purple hearts, two combat infantryman’s badges and a combat action badge. The common link all these veterans share is that they all carried the same war torn pocket bible and by God’s grace all made it home alive.

Zac Miller was born in 1983 and grew up in the small town of West Lafayette, Ohio. He knew at a young age that he wanted to serve his county. He spent all his free time as a child playing army with his neighborhood friends. He came from a long family of veterans; both of Zac’s grandfathers served. One was a WWII veteran, and the other served during the Korean War. His father served in the Air Force during the Vietnam War and in the Army National Guard during Desert Storm. In his teenage years, Zac knew he wanted to serve and jumped at the first opportunity he was presented with. At the age of seventeen and a junior in high school, he joined the Army National Guard with his parents’ consent. He was working on a local farm at the time with a friend named Jared Lillo. They spent countless hours together picking sweet corn and pumpkins, baling hay, and doing whatever else needed to be done. During this time, they decided to join on the buddy plan, which allowed them to pick their job in the military and would ensure that they went to the same unit of assignment. Talking to the recruiter, Zac wanted to become an armament repairman, which is a military term for a gunsmith. Jared wanted to become a wheeled vehicle mechanic. The recruiter explained to them that they would try to get them these jobs but made them pick a secondary job just in case he couldn’t get two slots in the same unit. So they both picked 11B Infantry as a secondary choice. It appeared that they were going to have to go for infantry because of manning issues. So for that reason, they were sent to Fort Benning, Georgia, home of the infantry, for their basic training, which they attended between their junior and senior years in high school. Unlike most horror stories you hear about military recruiters not taking care of their recruits, Zac’s did; and when the time came, he was actually able to get them both into their first choice of jobs since they had not done AIT (advanced individual training) yet. They would end up at the 211th Maintenance Company in Newark, Ohio, for their first duty station. Zac graduated high school in 2002 and tried his hand at college, attending Hocking College with intentions of becoming a game warden. He didn’t enjoy college that much, and when the opportunity came, he was hired full-time by the Ohio Army National Guard to work as a small arms repairman. Zac ended up working full-time for the Guard until November 2016 when we has hired as a county veteran service officer for Coshocton County. Zac’s military experience includes three deployments to the Middle East, the first one in 2004 and the last one being in 2017-18. He started his career enlisted as a private and worked his way to sergeant. After ten years in the service, he was ready for a change and put his packet in to become a warrant officer. His packet went through, and he went to Warrant Officer Candidate School and was promoted to the rank of warrant officer 1 in 2011. He is still serving our great nation as a chief warrant officer 3 and has twenty years and counting of service at the time this book was being published. While Chief Miller is still serving, he has a double life as a civilian. He married his high school sweetheart, Breann, in 2007, and they have two children together. He started a small business in 2011, Black Rifle Customs LLC, where he sells new and used firearms and does gunsmithing. He is also the director / county veteran service officer for Coshocton County’s Veterans Service Office, where he enjoys his other passion: taking care of fellow veterans and their families by helping them get the benefits they have earned. He volunteers his time serving his fellow veterans as a director on the board of a local nonprofit, Operation Veterans Helping Veterans (OVHV). He is also a member of the Coshocton County Honor Guard, which performs military honors at veterans’ funerals around the county. At these military funerals, he can normally be found acting in the commander’s role, folding the flag and presenting it to the next of kin of the deceased veteran.