Open the Church Doors and Let Me Out!

by Simon and Marie-Anne Petelo 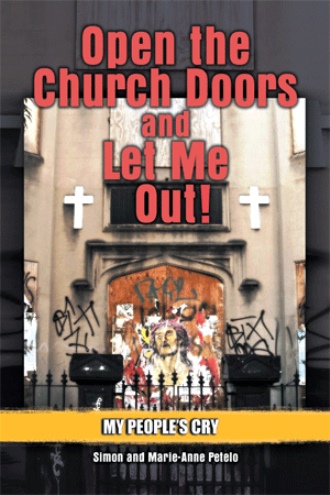 The Evangelical/Pentecostal church has 90 million followers in the United States and covers millions more in North America, South America, Western Europe, Australia, New Zealand and Africa — this post-Protestant movement has dominated and captivated the Christian community since the 1970s. Described as emerging, charismatic, modern, reformed, refined, innovative and contemporary; this global church has promoted Christianity to be fashionable. Spearhead by internationally renowned televangelist preachers who teach and adopt a fundamental faith movement.

This radical journey of outspoken faith has become the fastest growing craze in modern Christianity and been undertaken by millions of unsuspecting people who are leaving their traditional mainstream churches to join this innovative solution for their faith. Their sermons have become the most listened to gospel in modern time.

Open the Church Doors and Let Me Out! is the remarkable true story of a missionary family travelling to North America only to find themselves abandoned by this local church. Following the Evangelical ethos, they discover that the innovation and declaration of its gospel is far from the lights and glamour of its staged productions.

A deep, bold, compelling and stirring testimony which exposes controversies and biblically challenges the practices of the global, emerging, Evangelical church. It is the cry of millions of born again Christians around the world who are saying, 'enough is enough!'

Simon and Marie-Anne Petelo are teachers and missionaries. Together, they have worked in the education, youth, community and welfare sectors for over twenty years. They have worked side by side with families and communities and have grown to understand and listen to the hearts of people. Simon’s background is in youth, welfare, juvenile justice and rugby coaching. Marie-Anne’s background is in teaching Business, Commerce and Economics as well as being an artist and painter. They have a heart to see the Church of Christ, act like Christ. They live in Sydney, Australia and are the proud parents of a delightful daughter.