Do Ask Do Tell: Speech Is a Fundamental Right; Being Listened to Is a Privilege

Speech Is a Fundamental Right; Being Listened to Is a Privilege 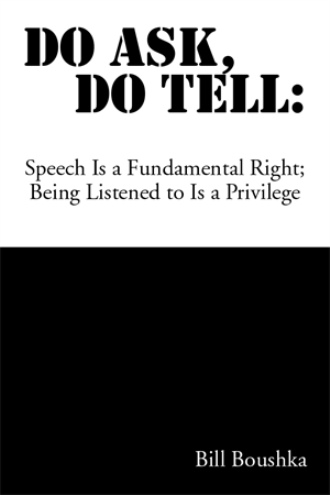 Do Ask, Do Tell: Speech Is a Fundamental Right, Being “Listened to” Is a Privilege is the third of a sequence of my “Do Ask, Do Tell” books. The general themes of the books are individualism and personal responsibility, and especially how these precepts apply to “gay equality” and free speech issues. The first book was Do Ask, Do Tell: A Gay Conservative Lashes Back in 1997. The book was motivated by the early fight over gays in the military that ensued after President Clinton’s inauguration in 1993. There is a long narrative going back to my own expulsion from a civilian college and then my experience with the military draft, which makes for a certain irony. The book, toward the end, switches from historical and autobiographical accounts to policy discussions on discrimination in other areas, which are presented in a manner concentric to the military issue as like a “superstorm core.” One important concept is that individual rights are connected to the ability to share risks (like availability for military service) that belong to the common good. In late 1998, I published a supplementary booklet, less than a hundred pages, called Our Fundamental Rights, which does not carry the “Do Ask, Do Tell” prefix. In 2002, I published Do Ask Do Tell: When Liberty Is Stressed, a set of essays that respond to the issues accentuated by the 9/11 attacks and by new legal threats to Internet speech (such as the 1998 Child Online Protection Act, or COPA). One idea that I covered in the book was a “Bill of Rights II.” The latest book traces these widely dispersed issues centered around individualism further, particularly in areas like various threats to Internet freedom that we take for granted, gay equality (including marriage and parenting), the workplace, and eldercare, the latter driven by rapid demographic change. The new book is in two parts. Part 1 comprises a prologue and six nonfiction chapters about different problem areas, with recreation of a variety of incidents at various points in my life. However, the sequence of narration is not chronological, as it was in the first book. Part 2 consists of three short stories. The stories demonstrate some of the ideas in the nonfiction chapters. One, written in 1969, is a somewhat fictionalized account of my own Basic Combat Training experience in 1968. The second, written in 1981, depicts two former college roommates reuniting and going on a trip through countryside heavily damaged by strip-mining for coal. The third, written in 2013, presents another road trip, this one more bizarre, with the protagonist, having gotten “what he wants,” returns home to find a world besieged with an unusual catastrophe and ready to accept the idea of an “instant family,” like it or not. My ideas about how to process all the questions about individual rights have become more subtle and far more personal. Back in the 1990s, it was easy to say that social and political policy should be fiscally conservative yet socially liberal. Libertarian positions, of minimal government at all levels, seemed to promote individual rights; there was no legitimate reason for the state to concern itself with adults in the bedroom or even what they choose to put into their own bodies. Of course, even then, as I discussed in the first book, there were enormous practical tensions. Even though there were plenty of complaints that gays and singles were not treated equally in public policy, in practice people without families often had much more discretionary income and much more time for their own pursuits. In time, it has become apparent that the disinclination of many people to have children at all can lead to enormous problems in the future in funding retirement income and health and custodial care. In areas ranging from the epidemiology of HIV to the way bizarre and dangerous infectious diseases are incubated by agricultural practice in the developing world, and in debates about vaccine policy, it is apparent tha

Bill Boushka was born in 1943 and raised as an only child in Arlington, Virginia. He became a good student and started piano at age eight. But he fell behind in physical and social development. He was expelled from college after saying that he was gay in late 1961. Nevertheless, he graduated from another school and earned an MA in mathematics and was drafted in 1968. When the “Don’t Ask, Don’t Tell” policy emerged in 1993, he leveraged his own irony to become a writer and blogger.