THE SIGNS THAT JESUS DID SCROLLS 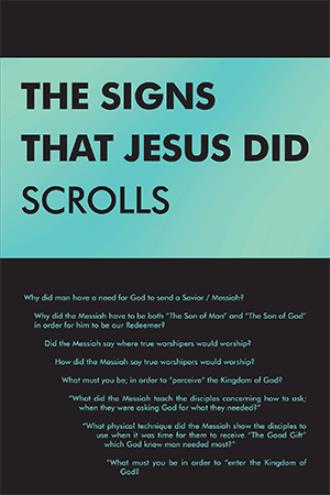 When Adam (representing all of us) failed to follow God’s instructions, it threatened all creation and separated all of us from God. However God still loved us and had a plan to reinstate man (mankind) and again endue him with the authority originally delegated to him by God. That plan was the Messiah/Redeemer (a man)! As the Bible says: “For as by one man’s disobedience many were made sinners, so by the obedience of one shall many be made righteous.” [Romans 5:19] Before the time of Jesus (and over the years since) many have been acclaimed as the messiah (and there will be more in the future). BUT there was and will ever be Only One True Messiah!

These are the Scrolls/Books (known to the world as “the Gospels”) that document and testify to this Messiah’s:
1. Birth right Eligibility to be the Messiah-Redeemer.
2. Fulfillment of his God given assignment to Redeem mankind.
3. Words; deeds and life that demonstrated his calling as the Great Prophet of God.
4. Teachings; proving that he was/is The Greatest Teacher concerning the spiritual things of God.
5. His brave; strong Life; in obedience to God; which displayed his worthiness to be our Leader/Lord.
(Both now and in the coming Kingdom of God.)
- - - - -

These books/scrolls are contained within currant Bibles. However; as presented; do not really give it as it was meant to be spiritually seen. The insights within this book; will open-up the understanding of these four Scrolls; to all who have an ear to hear. These insights will make clear these testimonies; to today’s believers; so that they will understand them as the Apostles and believers of the first century did and prove beyond a shadow of a doubt that: The One True Messiah was/is Jesus of Nazareth.

Ted Matthews is a married Christian believer who was saved as he readied himself for the worst; when on a military fl ight to Vietnam in June of 1968. He had been told that to be saved he had to make Jesus his Lord. So while in fl ight over into that nightmare; He prayed and told God that although he didn’t “really” understand why Jesus should be; he accepted him as his Lord.