M.D.s and D.O.s in California 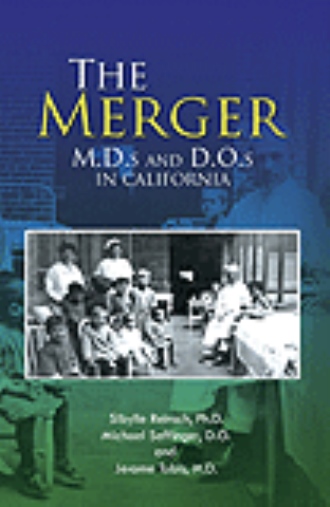 The Merger: M.D.s and D.O.s in California

If you are interested in the recent history of the medical professions, this book is for you. If personal narratives of historical events speak to you as a second layer of documentation, this book is for you. If you are aware that in America there exist two separate yet equal, fully licensed physicians, M.D.s and D.O.s, you might be interested in learning about their unique relationship in California. If you know little about D.O.s, this book will give you a picture of their approach to patient care and to their M.D. colleagues.

The osteopathic profession in California has a unique history, as it differs dramatically from the profession’s history in the rest of the nation. More than 100 years ago, a small pioneering group of osteopathic physicians established in Southern California the Pacific School of Osteopathy to graduate physicians and surgeons with the ability to acquire an unlimited license. Since then, the educational, research, and regulatory arenas of osteopathy have seen in California low points of near elimination and high points of recognition.

Cultures are based on firm beliefs in the truth of their understanding of the world. Often they collide with those who respect different truths. Similarly, the medical culture in California went through collisions between osteopathic and allopathic medicine, often in response to competition and antagonism. Which values and beliefs about each other’s profession were held so fervently in California that prompted the unique event of absorbing the osteopathic profession into allopathic mainstream medicine?

This project explores the events, unique to California but with repercussions nation-wide, of a merger between osteopathic and allopathic medicine. In 1962, the relatively small medical organization of fully licensed osteopathic physicians (the California Osteopathic Organization) merged with the much larger mainstream medical profession (the California Medical Association). What were the incentives for a fully licensed parallel healthcare profession to forfeit its identity and philosophy? What key players and leaders emerged? How did the individual practicing physician think and feel about the merger?

While about two thousand osteopathic physicians changed to the M.D. degree, about two hundred California D.O.s did not merge but persevered in their battle to restore the licensing power of their profession in California. What social and personal motivational sources sustained this group for over a decade? How has osteopathy’s unique history affected medical education and professional relations, nation-wide and internationally?

Answers to these questions have emerged in historical narratives by key persons figuring in the events. Most of them have not written about their lives and their social and political surroundings at the time of the merger and its repercussions. Many never learned the long-term outcomes of their endeavors. Our multidisciplinary research team transcribed in-depth interviews to capture the thoughts and feelings among individuals who played significant roles from the 1940s to the ‘70s. With the approval of the Institutional Review Board of the University of California, Irvine for the protection of the participants’ rights, we asked a diverse group, 35 in all, of physicians, administrators, lawyers and lobbyists, to provide their historical narratives and their suggestions for future directions.

Our objective has been to give an unbiased account, listening equally to representatives of allopathy, osteopathy, and politics. Inspired by Dr. Gevitz’ cogent academic analysis of osteopathic medicine in America, this book presents personal perceptions of events, integrated with documented descriptions, stored in archives, to facilitate the reader’s understanding and analysis. The work has been based on the assumption