A Shaker Life: The Diaries of Brother Irving Greenwood 1894-1939 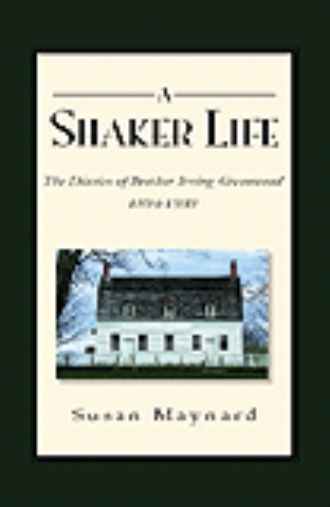 On September 18, 1886, Ervin Elmer Greenwood, age nine years and eleven months, arrived at Canterbury Shaker Village, East Canterbury, New Hampshire. In the Church Family records, the Sisters noted: “His grandmother, the only lawful guardian, accompanied him here, with two Shaker Sisters on their return from Providence. His mother dead, his father neglected to care for him. His grandma returned to Providence.” Fortunately, his grandmother entrusted him into the care of a community where he would be loved, educated, and trained to perform useful and fulfilling work and where he could grow to be a responsible and respected leader. ~ ~ ~ The Shakers were members of a religious, celibate, communal society based on Christian beliefs and values. Ann Lee, the founder of the United Society of Believers in Christ’s First and Second Appearing, who emigrated from England with a small group of like-minded followers in 1774, established their first community near Albany, New York. The term Shaker was coined by those who observed the spirited dances that were part of the religious service. By the early 1800’s, there were eighteen rural Shaker villages in New England, New York, Ohio, and Kentucky. The Central Ministry based at New Lebanon, New York oversaw the religious and temporal affairs of all Shaker Societies. Each Shaker village was organized into “Families” consisting of Brothers and Sisters and the children under their care. Orphans, children in need of foster care, and children of adults who joined the community, as well as adult converts replenished the numbers. Each Family was headed by appointed Elders and Eldresses who oversaw the religious and moral life of the members. By the end of the 19th century, the financial affairs were the responsibility of Trustees, both Brothers and Sisters. Most Shaker communities consisted of two or three Families, each with its own leadership, dwelling and work buildings, and its own fields, livestock, and industries. Founding members of many Villages donated their farmland and additional land was purchased so that some Shaker Villages owned several thousand acres of fields, pastures, and woodlands. The Elders of each community decided if an adult convert or a child growing up at the Village who reached the age of twenty-one was spiritually ready to become a Brother or Sister. Those accepted into the Society signed the Covenant, a lengthy legal contract between the convert and the community. Men and women lived separately; if a traditional family joined the community, husband and wife no longer lived together and their children lived in the Boys’ House or Girls’ House. The children were free to leave the community at the age of twenty-one or to choose to remain. Those who joined the Canterbury Shaker community during the 200 years of its existence were individuals of diverse backgrounds and talents. The town of Canterbury, New Hampshire was founded in 1727 by English settlers who were willing to move fifty miles west from the seacoast settlements to purchase land on the frontier. By the 1780’s, Benjamin Whitcher, a Canterbury farmer, was an early believer in Shaker principles; he offered his hundred acre farm on a hilltop in the northeast section of the town as a home for a group of 85 adherents to the Shaker faith. His family and others in the area gave up their worldly possessions and their family bonds to live as Brothers and Sisters when Canterbury Shaker Village was formally organized in 1792. The new community immediately began construction of their Meeting House. Sunday morning services were held in the large, open space on the first floor. Worship included prayer, marching, and the vigorous movement of the Brothers and Sisters about the room which had led others to call them ‘Shaking Quakers.’ When Irving joined the community, the marching and dancing were no longer practiced. The 19th century was a time of growth and prosperity for the United St

Susan Maynard has a lifelong association with communities where Shakers once made their home, living first in Shaker Heights, Ohio and now in Canterbury, New Hampshire. She is involved in research and curatorial projects at Canterbury Shaker Village. She earned a B.A. and M.A. in History with a focus on 20th century U.S. history.