The Fox Family of Philadelphia 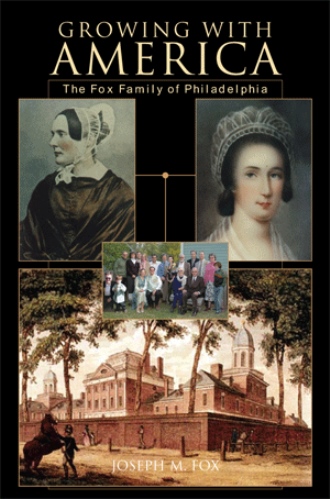 This book tells of a voyage of discovery by the author, a retired Bechtel chief process engineer and chemical engineering society director, whose previous writings concerned Methane Valorization and Fischer-Tropsch Reactor Design. Trying to explain why a thirteen year old boy would join a Quaker expedition to Philadelphia in 1686 he devises a fictionalized account that is eventually supported by genetic testing. Along the way he discovers, among his ancestors, a master carpenter turned politician, America’s first golf club owner and a doctor of whom it was written, “There was a popular notion that he cured his patients.” He finds a “Young Squire” who taunts the British with school pamphlets during the Revolutionary War and several Quakers who were sent off to Virginia during that war - much as we locked up the Japanese during World War II.

While written as a family history, the reader will find tie-ins to Benjamin Franklin’s papers, to Shakespeare’s The Tempest, to a British diarist who wrote about William Wordsworth and to an anti-slavery tract by Fanny Kemble. The book sheds light on family’s papers kept under wraps at historical libraries but leaves the final answers up to future generations.

In the author´s own words, "I became interested in Fox family genealogy as a result of a business trip to Bechtel’s London Office in 1974. While there as the process design manager for an Algerian Liquified Natural Gas project, I took the opportunity to visit the Friends’ Library on Euston Road. There I found a family tree called Descendants of Francis Fox of St. German’s, by Joseph Foster and also Anne Cresson’s biography of my own ancestor, Joseph Fox, who had been Speaker of the Pennsylvania Assembly during the Stamp Act uproar. I also located several books that seemed of immediate interest: The Journals of Caroline Fox 1835-1871, edited by Wendy Monk, and a biography, Caroline Fox, by Wilson Harris. These gave the approximate locations of several family estates out in Cornwall near Falmouth. There had been many famous visitors to these estates; men such as Wordsworth, Tennyson, Mill and Carlyle, and Caroline Fox had described their conversations in her Journals.

"I then convinced a fellow process design engineer, Bob Chu, to drive with me out to Falmouth over a weekend. There we found the closed offices of G. C. Fox & Company, shipbrokers, and the Fox Rosehill Gardens but no other sign of Fox activity. I was a little discouraged. Bob was intrigued, however, and insisted we investigate further. So on Sunday morning we drove further west and found the Glendurgan estate, with foxes on the gateposts and Mrs. Philip Hamilton (Rona) Fox about to start up a lawnmower in the garage. She immediately dropped what she was doing and led us into her house where notes were compared on family connections. One of Francis Fox’s sons had sailed to Philadelphia in 1686 on the same ship as Justinian Fox, my own ancestor.

"Bob and I then had a chance to tour the fabulous Glendurgan Gardens, just recently added to the National Trust. We also stopped off at Catchfrench, an estate in St. German’s, near Plymouth, where I sat in the ruins of the house where Francis Fox had lived in the mid-1600s. This was enough to send a chill up my spine and got me to thinking about recording all of this history. Back in London, Rona’s second son, Charles Lloyd Fox, introduced me to more relatives. As is described in this book, our families have maintained this relationship ever since then.

"Work on this book actually started in 1992 after I retired from Bechtel and my wife, Betty, died of Lupus, both in rapid succession. I joined a Creative Writing Extension Class run by U. C. Berkeley and, for my project, started the fictionalized account recorded in the first two chapters of this book. I had learned that Justinian had only been 13 years old when he joined t