The Lost Art Of Giving Back

A Helpful Guide to Making a Difference 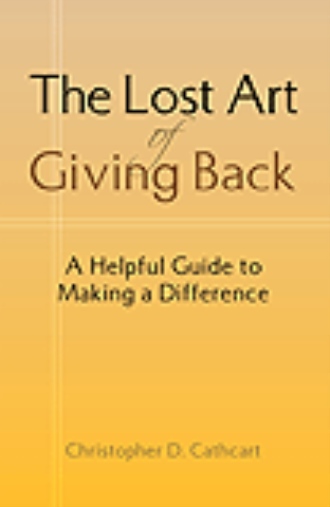 Christopher D. Cathcart is president and founder of OneDiaspora Group, a media consulting company based in Los Angeles, and OneDiaspora Project, a non-profit, community service group that strives to address such areas as humanitarian aid, HIV/AIDS awareness, and civic volunteerism. A graduate of Howard University, Cathcart has been active in community service outreach for many years, frequently speaking to schools, universities, and organizations, as well as mentoring youth of all ages. Professionally, he has served as an executive with such companies as CNN, Motown Records, and Warner Bros. Television. As an independent contractor, he has consulted with such businesses as Hidden Beach Recordings, Jaguar Cars, and UniWorld Group, Inc., a leading advertising and marketing agency, among many others. Cathcart is also co-founder of the “As Powerful As You Want To Be” Boot Camp series, a career and life-enhancing workshop that teaches public relations, brand marketing, and mentoring skills to students, entrepreneurs, and emerging leaders hailing from a variety of fields. An acclaimed public speaker, published editorialist and former seven-year mentor for Big Brothers, Cathcart sits on the board of several non-profit groups, including the Black AIDS Institute, the nation’s leading organization combating AIDS in Black communities; and R.I.S.E Inc. (Reaching Inside for Self Esteem), a Washington, DC-based community service group. Cathcart has dedicated much of his life to assisting those in need. The Lost Art of Giving Back is his first book.