THE QUEST FOR THE NEW JERUSALEM: A MORMON GENERATIONAL SAGA 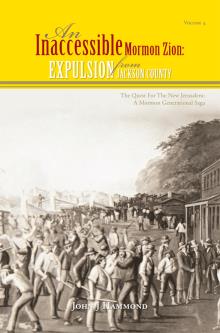 This is the first volume of a multi-volume work entitled The Quest for the New Jerusalem: Mormon Generational Saga , and it ends with a listing of the titles of all sixteen volumes in this series which have been written to this point. Before discussing the first volume, it is necessary to describe the entire series. Around the year 2000 the author began a thorough investigation of his genealogical roots, and to his surprise discovered that many of his ancestors had played significant roles in the early history of America and central roles in the history of Mormonism.

Wherever he looked, his ancestors were there: during the colonial King Phillip’s and French and Indian Wars in New England; at the Battle of Bunker (actually Breed’s) Hill and on a prison ship for two years on the Hudson River during the American Revolution; on whaling ships in the south Atlantic and northern Pacific during the 1840s; at Mormon Kirtland, Far West and Nauvoo during the turbulent and often bloody events of the 1830s and 1840s; in the earliest Mormon experiments with polygamy (almost all of the author’s ancestors were polygamists); in San Francisco and Sacramento during the earliest stages of the California Gold Rush; in the immigrant ships filled with Mormon converts crossing the Atlantic; in the wagon trains carrying the “saints” across the plains to Salt Lake City; during the establishment of the Mormon Church in Hawaii in the early 1850s; in the first haltering steps toward elementary and higher education in Utah; during the “Mormon War” with the U.S. army in Utah in 1857-58; in the operation of the early Salt Lake Theater; in the building of the transcontinental railroad across Utah in 1869; in the settlement of the wild “four corners area” during the 1880s and 1890s; in the rather secret and somewhat underhanded process by which Utah became a state; and in the pioneer settlement of southern Idaho in the early 1900s.

The author felt impelled to tell these wonderful ancestral stories, and it became obvious that this could not be done without giving an account of the history of the Mormon Church—the two subjects were intimately interwoven. Furthermore, telling the linked ancestral/Mormon story, beginning in the American colonial period, could not be adequately undertaken without giving an account of significant events in the larger American story.

In recent years a number of writers have given us fascinating, generational family stories; Alex Haley’s Roots is a well known example. Haley traced his African-American family all the way back to a slave taken from a village in Africa. In 1991 Chinese-American Jung Chang’s, in her Wild Swans: Three Daughters of China, told a wonderful story of three generations of Chinese women--her great grandmother, grandmother, and mother--reaching back to China. Adele Logan Alexander’s Homelands and Waterways: The American Journey of the Bond Family is an account of several generations of the author’s African-American family. Concerning another example--James Fox’s The Langhornes of Virginia --reviewer Robert Skidelsky wrote: “It was a clever idea to use family history to write about social and political history.” What Fox does is to use “the Langhorne sisters as a peg on which to hang the story of the decline of the British aristocracy, or Empire, or both.”

John Hammond’s multi-volume Mormon Generational Saga evolved into something very similar to Fox’s, but he utilizes family history to write about religious as well as social and political history. In fact, what has emerged is a very detailed examination of the early history of the Mormon Church, with a special focus upon how that history affected his ancestors.