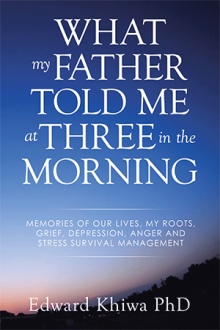 WHAT MY FATHER TOLD ME AT THREE IN THE MORNING
Edward Khiwa PhD
$19.99 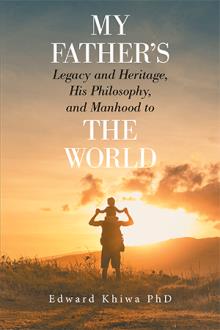 My Father's Legacy and Heritage, His Philosophy, and Manhood to The World
Edward Khiwa PhD
$16.99

SUMMARY Every nation should determine the future and the goals of public health inn protecting its population. As Western nations such as tobacco companies of the United States, Britain and others, are improving their gross national products, they are instead exporting a major public health burden to the Emerging nations….mostly various kinds of cancer, especially “lung cancer” which has had a high toll of mortality to the populations of different nations of the world. The World Health Organization after decades and billions of dollars later lost the fight against Malaria. The world has surrendered to the disease. Nothing left in the world except old wives tales type of pseudo-preventative measures that does nothing except put the population in a form of false security. The fight not only lost, but the enemy has actually become stronger, and we have nothing to further combat it. it is a raging fire that onsumes without mercy. For many years, the drug of choice was Chloroquine or quinine. During the Korean war in the 1950’s, many troops of an African or Mediterranean ethnic origin have exhibited severe allergic reaction to quinine. There it was discontinued and only Chloroquine was used. After many decades of Chloroquine use and misuse of Chloroquine resistant strain of Malaria made its appearance on the scientific scene in Southeast Asia and later the African continent. To date there is no medication available for the resistant Malaria. The best we have is a prophylactic dose of Chloroquine prior to traveling to an endemic area. This is still an effective measure only in the Americas where the Malaria is still sensitive to chloroquine. The resistant stain has a very wide range. It has been observed as far east as Afghanistan and Kazakhstan, and as west as West Africa. The death rate is very high becauses of several common denominators. Most of these countries are over-populated, poor health care programs, no preventative programs, mostly illiterate population and most importantly, very poor economic status. These countries mostly rely on outside help from the industrialized nations or the United Nation health care arm (WHO). Consistent factors of all outside aid program, they are very costly, usually without previous careful long-rang impact studies, in most cases are very short lived. The result in most cases is disastrous; the needy country usually is left with a white elephant health care program that is a failure and cannot afford to maintain on their own either from a technical standpoint or form a financial shortage. For a long time we believed that more is bigger and better and the rest is history. Malnutrition further complicates the picture complicates the picture. In economically poor counties their people are not able to take the proper nutrients to sustain good status of health. The malnourishment affects the immune system which, as a result, renders the population of the endemic areas with higher propensity to contract Malaria and other diseases as well. These conditions combined results in the outcome of increased incidence of the disease and shorter life expectancy of the patients. Furthermore, the disease’s vector (Mosquito) has become more resistant to eradication efforts, and as a result, its range has become increasingly greater every year. For many years the spray methods of wetlands, stagnant pools, and slow flowing steams have proven useless. Yet these methods continue. Why? The answer is very simple; it is cheap, available, easily applied, and most importantly politically conveinient. But the reality is that these methods are a dismal failure; one only has to look at the numbers (increased incidence of Malaria and the increased range of the vector). Poor sanitary practice due to lack of education and the financial means to build water treatment facilities or even the ability to supply fresh clean water have contributed to the spread of the most preventable of diseases, Cholera disease caused b

DR. EDWARD KIHWA-KIWUWA is a university associate professor in Oklahoma (USA): he is a specialist of system of preventive medicine, health administration organization and policy for Contemporary and Emerging Nation. Dr. Khiwa-Kiwuwa is a regular visiting professor to the postgraduate medical students and health administrators of the Institute of Public Health School of Medicine, Makerere University, Kampala, Uganda. The Author attests that major challenges facing the Emerging Nation in the 21st Century is to predetermine independent for control of their natural resources; leading to proper health care for its citizens with less dependence for foreign contacts…dependency breeds subservice.