Dutch Reformer Between Luther, Erasmus, and the Holy Spirit a Study in the Problem Areas of Menno Scholarship 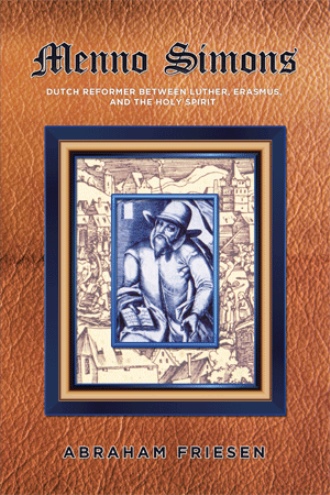 In 1962, the Reformation scholar Hans Hillerbrand said the following of Menno Simons: “For the past four hundred years he (has been) a man with a ‘bad press’—criticized not only by all of his foes outside his tradition, but also by many of his friends within.” Outsiders accused him of, at the very least, sympathizing if not actively supporting the revolutionaries involved in the notorious Münster uprising of 1534–1535, the jihadists of the sixteenth century. Many insiders, at first fearful that this might indeed be the case, sought early to distance themselves from him, calling themselves Doopsgezinde rather than Mennists. Later, other insiders, having moved beyond Menno theologically under the influence of the Enlightenment and Rationalism, criticized him for being overly dogmatic and narrow-minded. Only a few pietists like Jung Stilling and pietistically influenced Dutch Mennonites like Johannes Deknatel, together with the occasional Baptist scholar like J. Newton Brown, spoke highly of him. Indeed, the latter said of Menno: “But there stood one among them (the great reformers) whom they knew not; who was greater than they—more truly eminent in the likeness of their common Lord.” In a first section, this study begins with a chapter on the problem of reform in the sixteenth century. A second section on the 1534–1535 Münster uprising that has so bedeviled Menno historiography follows. Both sections seek to recreate, at least to a degree, the larger context of Menno’s life and activity and free him from the prejudices of the past. It does so by making the case—not made heretofore—that Menno was powerfully influenced, not by the revolutionaries, but by the two intellectual giants of the age: Martin Luther and Desiderius Erasmus. But the study also takes seriously Menno’s repeated assertion that he had experienced a life-transforming conversion through the power of the Holy Spirit in early 1535. With this as background, the study then investigates—in a chronological sequence—the key problem areas of Menno scholarship that have arisen over the years. It concludes with a brief assessment of his legacy.

Abraham Friesern was born in Winnipeg, Manitoba, Canada, on December 20, 1933, to Dutch Mennonite parents who had migrated from Siberia, Russia, in 1926. One of eleven children, he grew up on a farm near the town of LaSalle, Manitoba, and attended a one-room country school for his first four grades, moving to a “consolidated” school of four rooms in Oak Bluff, Manitoba, for the next four grades. His high school years were spent in the city of Winnipeg at a private school. He received his university training at the University of Manitoba (BA ’58 and MA ’62), the University of Göttingen (1957–58), Stanford University (Ph.D. ’67) and the Institute for European History in Mainz, Germany (’65 to ’67). From 1960 to 1963 Friesen taught at a private high school in Winnipeg, and in the summer of 1967, he was appointed Assistant Professor of Renaissance and Reformation History at the University of California at Santa Barbara. He remained there for the entire thirty-seven years of his teaching career, retiring in 2004. Together with his wife, Gerry, he now lives in Fresno, California. Friesen is the author of the following major studies: Reformation and Utopia: the Marxist Interpretation of the Reformation and its Antecedents (1974); Thomas Müntzer, A Destroyer of the Godless (1990); History and Renewal in the Anabaptist / Mennonite Tradition (1994); Erasmus, the Anabaptists, and the Great Commission (1998); In Defense of Priovilege: Russian Mennonites and the State before and during World War I (2006); and Reformers, Radicals, Revolutionaries: Anabaptism in the Context of the Reformation Conflict (2012). He has published some eighty essays, articles, chapters in various learned venues, translated some three major studies: one from the sixteenth century, one from the nineteenth, and one from the early twentieth century. Over the years, Friesen has lectured widely in the United States, Canada, Germany, and Paraguay, delivering a number of endowed lectureships.