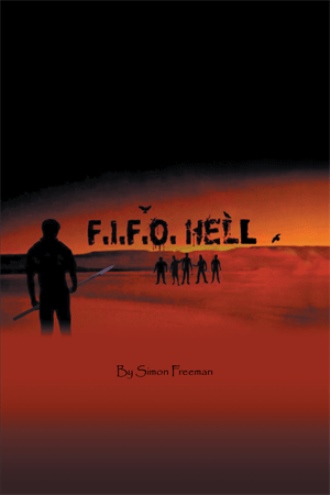 That night, Jake's sleep was fraught with nightmares. He had one which he could clearly remember. It was of his family standing in front of his house, smiling happily towards him as he walked down his driveway. His beautiful wife Simon was standing there holding his tiny newborn daughter on her hip as his two young sons stood either side of her, waving to him as he slowly drew near. Slowly was the operative word as he felt he was not getting any closer and, if anything, he was moving further away. He felt as though he was on roller skates trying to climb a steep incline. The harder he tried to move forward, the more distance there appeared to be between him and his family. He tried desperately to call out to them, but his voice wouldn't come. Soon they stopped waving and their attention was drawn to something behind him. In his dream, he whirled around to see what made them look so frightful and distracted from his presence. Behind him, he saw the barren expanse of the landscape familiar to his work site --only the bright, savage sunshine was gone, replaced by a light that flickered as if on the edge of a large bonfire at night. As the flames danced, the shadows darkened and stretched, taking the form of gaunt, humanlike creatures slowly moving in a way that would suggest they were ravenously consuming something. He couldn't make out what they were eating, but going off the sounds they were making, he knew they were hungry. The faster they ate, the more satisfied they sounded. He spun back around, hoping to see his beloved family still standing there, but they were gone. A vigorously burning campfire stood in their place. He could see other figures off behind the campfire, but two others were closer, savagely gnawing on something he couldn't quite make out. As he stood watching, the two figures stopped eating, raised their heads from their meal, and looked straight at Jake. It was Shaun and Cheko, and a look of absolute evil was upon their faces. The light shifted, illuminating their meal, filling Jake with confusion and horror. This time, his words came out loud and strong. “What the fuck are you doing?” They didn't answer him. They held forward the

In a remote construction campsite on the edge of Australia’s Great Sand Desert, a skeleton crew of workers awaits their turn to fly home for their rostered week off at home. Overnight, all contact with the outside world disappears, and it quickly becomes apparent that they are stranded in one of the most inhospitable and dangerous places on the planet. As lawlessness takes hold, the real horrors of survival take those left behind to places they can’t imagine, and they still don’t know what happened to the outside world.

Simon is a construction worker who has worked all around Australia in some of the most remote and inhospitable regions that the country has to offer. From his eight years within the FIFO (fly in, fly out) industry and a life of living in cyclone-prone areas, he has been able to create an interesting story regarding human nature and survival. From firsthand experience with observing people and their negative reactions at having luxuries momentarily removed from their lives, he has been able to make a unique story of the desperation for those who had everything taken from them.