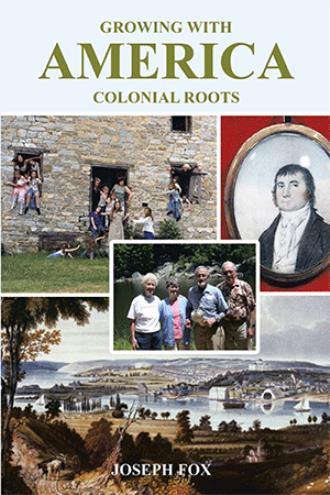 Our Fox ancestry was covered in my earlier book, Growing with America: The Fox Family of Philadelphia. Now we turn to Ruth Martin’s side of the family. She had colonial ancestors in New England, New Jersey, Pennsylvania, Maryland, and Virginia with names such as Alden, Wolcott, Lay, Carbery, Hite, Manning, Blair, Warfield, Dorsey, and Neale. They all converged on our nation’s capital when it was first being built. Rather than repeat what others have done, this book attempts to bring many of these ancestors to life by examining, in some detail, their timeline and life circumstances. A personal letter, a detail in a will, or even some good DNA detective work can move that curtain hiding a vista of the past. I wanted to try to understand the challenges these people were facing, so different from today but still the same human responses at play. I have not hesitated to speculate as long as this is truly identified as speculation. It became evident that there were a number of overriding themes I wanted to cover: (1) the convergence of many diverse traditions and religions, (2) some personal stories that interested me, including some memoirs never before published, (3) discoveries resulting from genetic testing, (4) the family’s interaction with slavery and the Civil War, and (5) recognition of earlier family research, setting the record straight where necessary. With the advent of full genome testing, it became possible to trace relationships in all branches of the family—not just the Fox male line or the all-female line. While quite haphazard in going back this far, this did tend to confirm what the books said about mother’s family. Most significantly, however, it led to contacts with a few very knowledgeable people and to some fascinating new speculations. In a way, this is a sequel to the earlier book since more Fox family information has been uncovered both via genetic testing and by personal contact.

Joseph Mickle Fox, III, is a professional chemical engineer and a graduate of Princeton University, where he was a junior year Phi Beta Kappa in 1943 and received his Master’s Degree in Chemical Engineering in 1947. Now retired, he worked for 19 years for the M. W. Kellogg Company (now part of Halliburton) Research Laboratory and for 26 years as a Process Design Manager for the Refinery and Chemical Division of Bechtel Corporation. His special expertise lies in the area of alternative fuels and he continues to consult occasionally on gas-to-liquid technology. He is the author of three patents and over 20 technical articles, the best known of which are a survey of Methane Valorization and a report on Fischer-Tropsch Reactor Selection. Active in chemical engineering society affairs, he was a Director of the National American Institute of Chemical Engineers from 1972 to 1976 and served as chairman of several local sections of the Institute. The son of a Pennsylvania Railroad civil engineer, he is the ninth member of his family to bear the name Joseph Mickle Fox. He, his brother and two sisters grew up in the east and midwest – wherever the Pennsylvania Railroad operated trains – but his family always considered Philadelphia their home base. He married Betty Larkin Fox of Rock Island, Illinois, in 1948 and they soon settled in New Jersey. He moved his wife, Betty, four sons and two daughters to Lafayette, California, in 1966 as a result of transferring from Kellogg to Bechtel. Betty died in 1992 and he remarried in 1996, this time to a widow with three sons, Shirley Mutchler Pugh. Fox has been an art docent at the Oakland Museum of California since 1994. He has served as Chair of the Art Steering Committee and volunteered for many years as writer and editor for the Docent News and as a member of the Docent Website Committee. Fox has been interested in genealogy as a hobby since 1974 when, on assignment in London he discovered Fox relatives living in Cornwall. In 2004 he started the Fox Y-DNA Surname Project at Family Tree DNA and has served as its administrator ever since. The project now has over 300 members. His report summarizing some significant Fox Project findings was published in the Fall, 2016, issue of the Journal of Genetic Genealogy. His outdoor hobbies are tennis and swimming and he remains an active member of St. Perpetua’s Roman Catholic Church, in Lafayette, where he helped organize the Senior’s Activity Group (SAG) and has been active in the Social Justice Committee. He and his wife Shirley are Elderhostel enthusiasts.