Understand to Be Understood

By Using the Process Communication Model 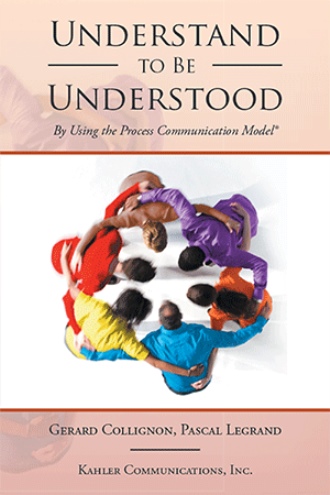 In this book there is something for everyone. The theorist will have ample opportunity to test his or her current knowledge against this model, to find answers to questions and to stimulate more thinking. The person who needs to see and understand the value of committing time to learn something new will not be disappointed. You will certainly find a rich source of material that will add value when applied in the workplace. The person who likes to play with theory, tossing it around, testing it on friends and even applying it at work, will like this book, as there will be stimulation enough to satisfy. Those who care about people and want to know how to further improve on the quality of their relationships will love this book. People who need to grasp the nettle of tricky situations and apply what they know to get results quickly that make positive impact on their bottom line will grasp the power of this tool. Those who need to take time to turn things over and examine them by reflecting upon the learning points and seeing how to use the tools will find plenty to stimulate their imaginations. This book about coaching using PCM is overflowing with the complexity and at the same time the ordinariness of people in relationships.

This model can help you develop skills in four areas:

Gerard Collignon is a psychologist (PCM), certifying master trainer, and executive coach. He began his working life as a youth worker before graduating as a clinical psychologist in 1982. Having discovered transactional analysis at the end of the 1970s, he found that Taibi Kahler’s miniscript proved extremely useful and effective in mentoring as well as in preventing teenage crises and managing teenaged clients actively in crisis.

In 1987 Gerard invited Taibi Kahler for the first official PCM seminar in France. Certified as a trainer in process communication since 1989 and a master trainer since 1995, Gerard has trained hundreds of trainers and thousands of managers. In 2011 he became the only second certifying master trainer in the world.

In France, 2,030,000 people had been trained in PCM by June 2016. There are also more than 1,250 trainers and coaches certified by Taibi Kahler and by Gerard Collignon, and every year, 50 trainers and 50 coaches become certified in PCM.

The original French version of this book was the result of Pascal Legrand’s and Gerard’s experiences in coaching. John Parr contributed new material to the English version, and Taibi Kahler provided mentoring, suggested corrections, and read the finished work to ensure fidelity to the model. Gerard is grateful to both of them for their contribution to achieving “Parlez-vous Personality? Coaching with Process Communication.”

Pascal Legrand has been a coach in companies for twenty years and a supervisor of coaches. He is a member of the French Coaching Society and was a member of the society’s certifying committee for five years. He studied transactional analysis for eight years through IFAT, the French Institute of Transactional Analysis, before becoming an NLP master practitioner and PCM certifying master trainer. He is also MBTI and Golden certified. Pascal has an integrative approach to coaching.

As a trainer and consultant for Kahler Communication France for 11 years, Pascal has led training courses and certified and supervised 250 professional coaches. He has also been a speaker for the Ecole Supérieure de Coaching.