An Unexpected Event Will Mark Out a Family’s Destiny. A Story That Takes Place in Modern-Day Mexico. 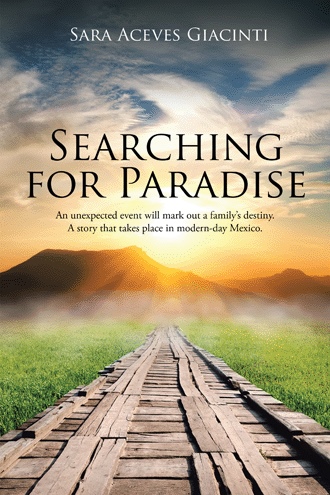 Searching for Paradise is a novel that has been inspired by the thinking of Eduardo Galeano: “Our courage is born of our fears, and our certainties of our doubts. Dreams point to another possible reality, madness to another kind of reason. We discover things in the place or places where we become lost; one has to become lost to find her- or himself again.” It is a story about the creation of large biotechnology plants in Mexico, and about Eva, a young, single woman from a provincial town who manages to become the owner of such a business. She searches for love from her partner, the father of two of her children. She is forced to suffer because of the nasty behavior and selfishness of what is supposed to be her family; also because of an opportunistic society. Eva founds, in the small city of Aguaclara, the first plant of its type, with its research labs and creation of patents. It becomes the first Mexican business to become registered in 50 years. During her earlier years, Eva turns to one of her uncles who has an export assembly plant. There, she learns about entrepreneurship. Nevertheless, clothing plants, like all Mexican export products plants, begin to feel the effects of investors going to China, after they stop investing in Mexican business ventures. Eva finds that she is forced to work as an employee at one of her uncle’s plants, and later on, at her father’s construction company. Five years later, when she is only 21 and divorced, and has a three-year old son, she meets the man who will become her partner, Juan Blanco, and falls in love with him. The birth of a new business era, and a love story between two people from different social classes, makes Searching for Paradise a great classic.

Sara Aceves Giacinti, originally from Mexico, is an entrepreneur, lecturer, life coach, philanthropist, and writer. She is a business expert and also an expert when it comes to leadership and personal transformation. In 1991, she founded, along with Edgar Arroyo, Grupo Industrial Aguascalientes (GIA), the name of which was later changed to the GIA Company. In 2001, she became a founding partner for the Protengia Institute and Gialive, which is a social project of the organization that sponsors Andy Project. In 2005, she lent her support and advice for the book En el nombre de mi hijo, which was published in 2006 by Random House Mondadori, where she worked in collaboration with the writer, Elena Poniatowska, and journalist Arieli Quintero. In 2006, she moved to the United States, where she ventured into different research studies on markets and communication media. She took part in business development courses at Stanford University, where she had the opportunity to learn from Condoleezza Rice. She is a founder and active member of the Andy Project Foundation by GIA, which promotes intensive programs targeted at creating healthy lives and massive social assistance in several countries. In America alone, it supports more than four thousand children stricken with cancer. In 2015, she joined the Latino entrepreneurs’ program at Stanford University, which is the first national initiative for Hispanic and Latino businesspeople who live in the United States. In 2016, she collaborated directly with John C. Maxwell in the Leadership and Intentional Living Program, which was carried out in conjunction with President Horacio Cartes and the government of Paraguay in different sectors of Asunción’s population. Sara is the mother of three sons. She lives in the United States and spends as much time as she can with her children and her little dog, Tato.