Sex, the Illustrated History: Through Time, Religion, and Culture 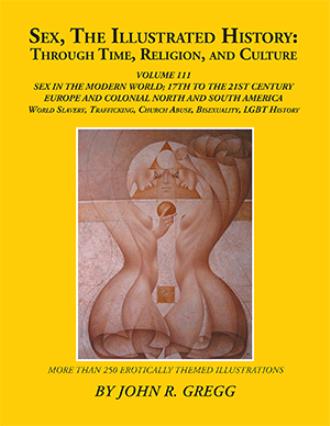 Sex, The World History, Through Time, Religion, and Culture. Section I includes, The Ancient World, Early Europe to the Renaissance and Islam. It is a daring exploration of human sexuality from the ancient to the modern world. Revealed are sexual practices and beliefs previously omitted or obscured from all historical telling. In a scathing condemnation of religion and its control of sex, the book explores complex relationships between spirituality and sexuality. The supremacy of the mother goddess throughout most of human existence, and her relatively recent fall, is detailed in both word and image. These pages share erotic artworks and explicit literary excerpts from throughout the world, painstakingly culled from the hidden treasure trove of cultures throughout history. Sex, The Illustrated History, traces sexual attitudes from the transcendent to the bizarre throughout the worlds’ cultures. Revealed for the first time is the bisexuality of the majority of human cultures. In Asia, the Pacific, Africa, the Americas, and Europe before Christianity most human cultures practiced male;male love as well as male/female love. Lesbianism is also treated in depth. It offers in very readable form an encyclopedic tour of the sexuality of humankind! Sex, The Illustrated History, Section II, begins a bold probe of human sexuality from Asia, Australia, Melanesia, Micronesia, Polynesia, ancient North and South America and Africa,moving into the modern world. The analysis of gender truths and religion and its control of sex continues as the book pursues intricate relationships between spirituality and sexuality. The book is leagues beyond the classic History of Sex, by Michael Foucault, written in the 1950's. Sex, The Illustrated History, Section III, begins a courageous exploration of human sexuality from the Enlightenment to the current modern world. Europe form the 17th century to the modern world, Victorian licentiousness, Colonial North and South America to the current day Americas,world wars and sex slavery, Roman Catholic molestation's, love-counterculture, child brides and forced marriages, slavery and homosexuality through time. The book explores complicated relationships between modern spirituality and sexuality.