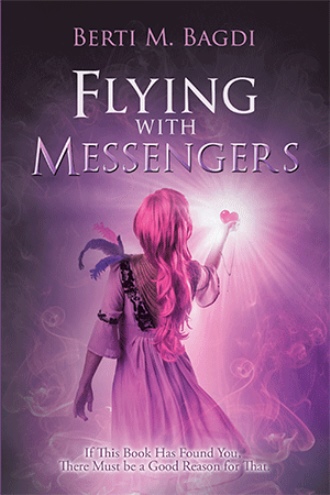 Violet anxiously rearranged her lacy, dark purple sleeveless blouse and then hid her hands in the pockets of her worn skinny jeans. Take a deep breath, that should calm you down, she reminded herself. The glass elevator ascended rapidly through an enormous waterfall, making its way up towards the Pantheon of Heaven. Godriel, a white angel and Violet’s chaperone, observed her with a smile. “Nervous?” he inquired. “A little,” acknowledged Violet, but in fact she’d nearly fainted from excitement. In the liminal state, she had been waiting decades for this moment. This was a great honour, the likes of which was rarely offered to only but a few humans. At the end of her most recent earthly existence, the opportunity had arisen to become an angel and help her fellow humans from a higher level of existence. In the liminal state, she had observed hundreds of humans and watched how some of them fall victim to their flaws over and over again, while others learned their lessons and make it to redemption. Now, finally the day had come and she could start her work experience prior to being promoted to a full-fledged guardian angel. She could hardly wait to meet her mentor. “You can’t imagine how mind-blowing the Pantheon of Heaven is,” Godriel said happily. “You’re going to love it! It’s only slightly better than the liminal state.” Godriel winked at Violet. The butterflies were flying widely around in her stomach and it was all she could do but force a faint smile onto her face. She couldn’t decide whether this chubby, messy spiked white haired angel had a masculine or feminine energy. Neither the physical appearance of the angel or the ground sweeping, flowing white robes testified clearly as to either conclusion. Not that it really matters, she thought, as she glanced at the glistening white wings floating gently in the air. As soon as her angelic promotion takes place, she too would surely acquire similar wings. Now, that would definitely be mind-blowing! She thought happily and felt another flutter of excitement in her stomach. She didn’t know much about what to expect, but what she already knew was that the white angels assisted the guardian angels and the powerful Archangels. There were at least ten white angels to every guardian angel and considering there are seven billion people on Earth and each person had their own guardian angel, then that amounted to… an awful lot of angels! But, as everyone knew, there was plenty of work to keep them all busy. As they stepped out of the elevator a harp chimed announcing their arrival. She had tried to imagine the Pantheon of Heaven a million times, but the moment she laid her eyes on it, all her expectations were exceeded. The glimmering kaleidoscope of colour was entrancing. She could see that all the colours were the same, except they were somehow more enhanced. She had never seen such vivid green grass or bright purple leaves and cyclamen flowers that covered the trees. The perfectly still, turquoise lakes blindingly reflected the sunlight and the white foamy waterfall flowed like silk into crystal-clear rivers. Gleeful cherubs floated all about the place, flying around with rainbow coloured wings in a perfectly clear azure sky. Colourful, glorious guardian angels were gathered together in the wide open field, surrounded by their devoted white angels. Violet’s attention was drawn to the hillcrest in the distance where shining crystal quartz pillars towered high into the sky and deep purple velvety vines cascaded up and down the magnificent structure. In that moment she noticed them. She stopped breathing for a moment as she absorbed the exquisite beauty of the main angels, the Archangels. They were the leaders of the Pantheon of Heaven and Earth, the right hand of the Big Boss. They were standing there graciously in a semi-circle to greet her. Their heavenly beauty was like nothing she had ever seen on Earth before. They were glowing in their gorgeous gowns and gigantic glamorous wings, which were at least twice the size of the wings of the white angels. Their colourful auras that surrounded their body glittered like diamonds in the sun. Archangel Michael was standing on the right in a royal blue cape, next to him was Archangel Gabriel in brilliant copper, Archangel Uriel in amethyst-purple and finally Archangel Raphael closed the semi-circle in emerald green. “We have eagerly awaited your arrival, dear Violet. Welcome to the Pantheon of Heaven!” The words echoed in her mind. All the Archangels smiled at Violet and in that moment, she felt a pleasant warm sensation appear in the centre of her heart which spread through her entire being. Was it possible that she’d been telepathically welcomed by the Archangels? Violet returned the smile and replied in her head, “It’s very cool and a great honour that I can finally be here in your presence!” And a more prominent sensation pulsed within her heart in response. “Come, Violet, we have much ground to cover and many introductions to make!” Godriel exclaimed. “I believe the Archangels just greeted me in their own sensational way.” Violet grinned excitedly at Godriel. The white angel laughed aloud. “Welcome to the Pantheon! I’d say they sent a large amount of love energy your way.” “Really? It was such an enchanting experience. I thought my heart was going to explode with joy!”

This exciting and romantic story is set in the contemporary time of heaven and earth. Here, feisty guardian angels fight their rivals, the demons, to best guide humans toward their true destinies and love. The natural duality of light and darkness has been thrown off-balance by the dark angels lately. Humans’ happiness scores are way too low on the guardians’ leaderboard. More and more people are being influenced by the demons. To guide humans is not an easy task for the guardian angels. They not only have to deal with the tempting demons—especially the deceitfully attractive demon prince, Belphegor—but they also have to respect the free will. Moreover, they need to get the humans to listen to their subtle guidance, including intuitive messages and signs day by day. The story follows two heroines’ adventures—the marketing manager, Lily, with her seemingly perfect life (that is not perfect at all), and the courageous angel, Violet, who was once a human as she tries to fit into the angelic kingdom. Heaven and earth fight side by side for light and true love.

It had never crossed Berti Bagdi’s mind to write a book. A Hungarian writer based in Australia, Berti has believed in the angels since her teenage years. In her thirties she left her regular job as a sales manager to live her childhood dream, becoming an actress. After a few years of an unsatisfying search for her dream movie, and dream role, she had one of those divine spark moments. She realised she needed to create a movie that she would love to appear in; one that would shake the world. Berti felt it was her true calling from the angels by the huge enthusiasm in which the idea rushed into her mind. The idea was to create a story about how the guardian angels help humans in their everyday lives just as she had experienced in her own life. English being her second language and lacking the initial confidence to write, Berti asked a few writer friends for advice. However, it seemed the story needed her own unique voice and perspective. The divine continued to deliver irresistible signs that encouraged her to just do it. She finally gave in and to her biggest surprise, as soon as she sat down, the ideas just flooded into her mind. Helpful people came into her life constantly, to inspire and assist her. After a few versions of the movie script and positive feedback, she received another huge call from above. This time to write a book that could inevitably bring forth her desire for a movie version. With a huge passion for completing something worthwhile and bringing it to the world, she has managed to complete part one and two of the book within two years. With this enchanting story Berti’s vision is to bring light and hope to people’s lives.