Life on the Run 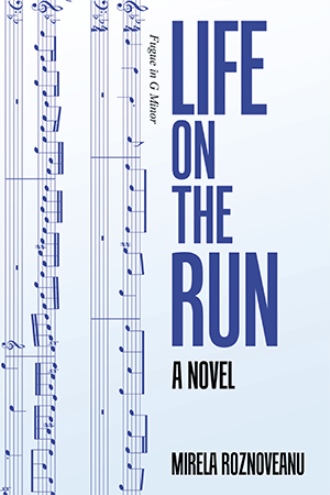 Mirela Roznoveanu’s Life on the Run is both a haunting novel and an essential historical and human document. As a novel, it captures the visceral experience of immigration and exile like no other book, fiction or nonfiction. It is fascinating to read that to lose one’s mother tongue is to suffer the amputation of a vital organ and that adapting to a strange culture changes the entire body. Using a light touch of magical realism, Roznoveanu vividly evokes the ancient Romanian culture she comes from—rich with magic, portent, and enigma—and its poisoning by Communism. She also gives us a fresh view of the dynamic, jarring culture of America, which both attracts and punishes the protagonist, infusing her body with a strange energy. As a document, this novel incorporates the author’s journals from the period immediately following Romania’s 1989 revolution—better termed an internecine coup d’état. By preserving and publishing this record, Roznoveanu has saved from oblivion the struggle of democratic activists, artists, and journalists whose hopes for a free Romania surged with Ceausescu’s fall but were brutally crushed. Life on the Run was suppressed in Romania, and little is known in the West of this critical period in which ruling communists changed their skin without ever releasing their grip on power. Scholarly studies might reach few, but this novel/memoir brings that human tragedy to life. Roznoveanu lived it and still lives its consequences—as, unknowingly, do we all. Annie Gottlieb Annie Gottlieb is a New York–based author, critic, and blogger whose work has appeared in the New York Times, the Nation, O, the Oprah Magazine, and other national publications. She is the author or coauthor of several books, including Do You Believe in Magic? Bringing the Sixties Back Home, Wishcraft: How to Get What You Really Want, and The Cube: Keep the Secret.