SO YOU WANT TO BE A DIPLOMAT?

An American diplomat's progress from Vietnam to Iran, fun, warts and all. 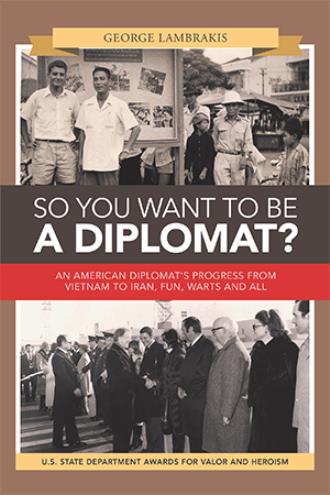 This book of memoirs is not like most. George Lambrakis, an American Senior Foreign Service Officer with over three decades of service, and two decades of teaching international relations and diplomacy, tells it in detail exactly as it was – and still is, fun, warts and all. His vivid anecdotes take us through live and dangerous action interacting with world leaders and common folks as we visit Vietnam and Laos, West Africa’s pro-Communist Guinea, Middle Eastern hotspots like Israel and Lebanon during civil war (where he has policy disagreements with Secretary of State Henry Kissinger and Director of Personnel Ambassador Carol Laise), and on to Iran before and after its revolution, passing through Munich, Rome, London, the U.N. in New York and Geneva, Africa’s Guinea-Bissau and Swaziland. All this with assignments of great variety in Washington, culminating as director of an office that is trying to limit the political fall-out of the U.S. military build-up in the Middle East - a build-up which later reverses Saddam Hussein’s invasion of Kuwait, but leads to the tragic invasion of Iraq and probably invites Osama Bin Laden’s attack on America.