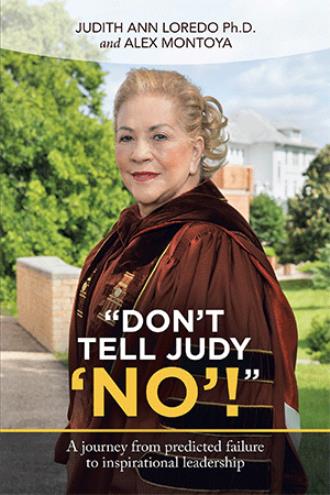 MAKING A DIFFERENCE People have always told me, “Judy, your life is a journey and it has been a remarkable one. You should write a book!” Honestly, I have been too busy dedicating myself to helping as many students as I can to get an education. I believe that my life story is worth telling, but when would I have time to tell it? Even more importantly, how would I write it when I have always been challenged by putting my thoughts on paper? Because of my father’s tutelage, my greatest strength since I was a young girl was articulating my thoughts through my speaking ability. I shied away from writing as much as possible, and I have always used the medium of speech to convey my thoughts.

JUDY LOREDO Judith G. Loredo, Ph.D. is a pioneering Latina educator. In a career that spanned 49 years, she specialized in bridging the gap in public and post-secondary education, envisioning innovative pilot programs, and increasing opportunities for females and students of color. She is the 20th recipient of the Dean Karl Brendt Award as the 1980 distinguished graduate of the College of Education at the University of Texas at Austin; holds three degrees from Our Lady of the Lake University; and holds a Certification of Completion from San Antonio Junior College. Dr. Loredo and her husband, Sonny, are the founders of Sembradores de Amistad, Austin Chapter, a charitable foundation which means “sowers of friendship.” Endowed scholarships for first generation students have been established in Austin-area universities in the name of the organization. Among her long list of awards and recognitions are: the Distinguished Woman Award from the Girl Scouts of Central Texas, a Hispanic Chamber of Austin Education Leadership Award, National Hispanic Hall of Honor inductee, and an Outstanding Professor Award from Sears Roebuck and Company. Additionally, she was named a Piper Professor at Huston-Tillotson University and was awarded Professor Emeritus status there. She and her husband Sonny of 37 years. reside in Austin, Texas, as a blended family. Sonny & Judy have a total of 6 children, 21 grandchildren, and 9 great-grandchildren. You can reach out to Dr. Loredo at failureturnedinsideout2020@gmail.com ALEX MONTOYA Alex Montoya is an award-winning author, international speaker, and writing coach. As founder of A-MOtivational Communications, he delivers inspirational keynote speeches and has published five books: Swinging for the Fences (2008), The Finish Line (2012), See the Good (2016), Wolfpack (2017), and Living Inspired: Motivating Your Kids, Colleagues, and Country (2018). He also co-authored Here Comes Cannonball: Reflections on the 40th Anniversary of Anderson Plumbing, Heating, and Air (2019). A graduate of the University of Notre Dame, with a Master’s degree from the University of San Francisco, he has spoken at Harvard, NASA, and Google. Alex is in the San Diego Unified School District Hall of Fame and was the featured author of the 2018 Literary Festival at Mira Costa College in Oceanside, California. He has also received a Lifetime Achievement award from the San Diego County Hispanic Chamber of Commerce and a Medal of Honor from the Colombian government. To learn more about his message of overcoming disabilities and other challenges, please visit www.alexmontoya.org. Montoya is a native of Medellin, Colombia, and resides in the San Diego, California, neighborhood of East Village.