The Unlikely Adventures of Alex and Nan 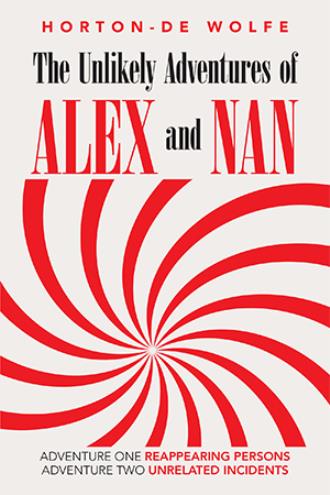 “Alex. Do whatever you can to keep that plane on the ground! This is a matter of national security. I You officially have carte blanche. Just don't let that plane take off!” General Bellis had instructed . Now it would be up to Alex to formulate a plan of some kind, any kind, to foil Todd's escape with the stolen element. Once the plane was aloft, it would not be found easily. It was at that moment that the jet's engines pitched higher, and the plane began to move toward the runway's eastern end. The two in the Lamborghini could actually see Todd in one of the starboard seats. “Oh brother,” slipped from Alex's mouth. “Do I need to know what you're going to do next?” Nan hoped there would be no danger-laden response. Alex was studying the situation. He saw their deliverance in an open gate several hundred yards away. He looked behind Nan at a recent purchase he had made, a small fire extinguisher, resting on what the car manufacturer called a “rear seat.” He looked back at Nan and said, “Hang on, girlie! We've got orders! This is a foot-off-the-brakes moment!” With a pitiful look, she again said, “Oh God.” “Brace yourself!” Alex turned the car around and shot through the open gate. Airport workers backed out of the way and watched in awe. Now things would have to be choreographed. It was nitty-gritty time and action had to be decisive. From his military protocols with General Bellis, fast decisions came easy to him. He was sure his plan would work. “What are you going to do?” Nan repeated, nearly beside herself. What could they do from the car? What plan had he concocted? This ride was nothing like her earlier experience today in this super-fast car, but she was in it, bristling with anticipation, and powerless to control anything. There was no getting away from the ordeal. Alex slammed the car into third gear and accelerated fortississimo down the taxiway. The usual takeoff direction from this airfield is east to west, due to the prevailing winds. Alex pointed the car east in order to come up to the plane on the starboard side just before takeoff. There was only one way this aircraft as going to stop. It had to be timed just right. He wondered how Nan would do with the challenge. “Here. Take this,” he ordered. Puzzled, Nan took hold of the small fire extinguisher and wondered aloud, “What now?” As they reached the plane, it had just released its brakes and wound-up its engines for take-off. The pilot had not detected the presence of the two pursuers; the copilot was not yet hooked into his seat belt. Alex brought the car up under the starboard jet engine and kept pace with the plane as it built up power for takeoff. For once, the Lamborghini's speed was about to be eclipsed. “Nan. stand up with the extinguisher and turn around.” “What!!” “Do it!” Nan did as instructed. In a few seconds she popped up above the car's roof line, standing on the seat with the extinguisher in her hands. Alex pushed the car toward its red line indicators, while the roaring jet effortlessly began to move past them. “Now, throw the extinguisher into the engine well!” “Oh, no, no …!” “Just do it!” Todd was looking out the window in front of the starboard engine, horrified as he realized exactly what was happening. “Increase your speed!” he screamed at the pilot, to no avail. “Okay! I'm doing it now!” Nan yelled. She was just under the front of the engine. Alex could feel her exertion, and when he guessed the extinguisher had been launched, he veered sharply away from the aircraft onto a taxiing lane. Almost instantly, the noise from the disintegrating engine was deafening. The car managed to escape all flying debris. Nan was bent over at the waist, enduring the whole episode as it unfolded. Alex tugged on her; she got herself back into the seat of the speeding car.They both watched as the engine had its final explosive event and the aircraft careened erratically amidst smoke and fire. The pilot braked and coasted to a stop. “Hurray for you, Cookie!” Alex shouted. “That's one canceled flight!” “I need to change my underwear,” she puffed. They watched as the plane came to a complete stop. The front hatch opened. The automatic staircase was deployed. Alex and Nan waited for Todd to come down the steps. The plane was still intact, except for the starboard engine, but now a cacophony of steam, smoke and noise enveloped it from front to back. Three fire trucks and a state trooper were quickly on the scene. In the maw of steam and smoke, the trucks had deployed their foam-squirting hoses which only added to the drama. Confusion reigned, and still no Todd. Alex and Nan had exited the car and hurried toward the plane. Alex ran up the forward stair to engage Todd, but the elusive turncoat was not to be found. As he made his way back through the rows of seats, Nan let out a shout from the tarmac. “Here! He's out here!” Alex had forgotten about the rear hatch. He heard Nan and peered from one of the windows. He could hardly believe his eyes as he saw Todd run from the rear hatch of the plane to his very own canary yellow Lamborghini. “Oh, God, no! Not the car!” Alex had deduced Todd's escape route. He, too, dashed down the rear foot well in time to see Todd start his priceless Lambo and screech off toward the open gate. “Oh crap!” he shouted, practically in Nan's face. “My God! He's got your car! What are you going to do?”. Alex spotted Todd's Porsche parked a short distance away. It gave him an idea. “You stay here and explain it all to the authorities. I just might catch him yet! "

Nan Holloway, a one-time network TV correspondent, is now barely making it as a PR consultant in small Upstate New York. Enter Alex Rayburn—a silver-haired man-about-town and a matchless detective, at least in his own mind. Life quickly changes for Nan, leaving her both titillated and terrified. In Adventure One: Reappearing Persons, Nan spots an ominous figure from the past and a missing woman reappears—dead. Nan and Alex are brought together in an uneasy partnership that turns out to be more dangerous—and more fun—than either of them anticipated. In Adventure Two: Unrelated Incidents, a cigar store Indian is stolen from Alex’s favorite tobacco emporium, and Nan learns of a threat made to a Native American environmental activist. Can the problematic pair uncover the sinister connection between these seemingly unrelated incidents without falling prey to a ruthless landowner and his murderous minions?

Writing as Horton-DeWolf, Martha Horton and Alan De Wolfe have combined their varied experiences and talents to contrive "Unlikely Adventures." Horton wrote for McGraw-Hill World News and was public relations director for an international hotel company. She is also a poet, and edited a weekly newspaper in Upstate New York. De Wolfe, a native of Corning, NY, traveled the world as a contract technical Illustrator. He has published several adventure novels and is a playwright and lyricist.