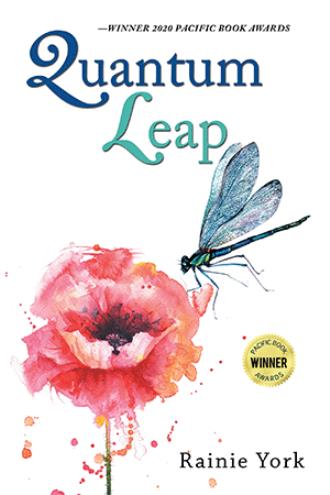 QUANTUM LEAP A Novel by Rainie York   Chapter One May 29 Justice is Served Rebecca Jean pulled her bedroom door closed behind her. The latch snicked softly into place. Walking lightly on the balls of her feet, she moved across the room to her desk. To her computer. Now that she had decided to do this, she was feeling a sort of guilty glee. What she was about to do could get her into trouble. Probably big trouble. But no one would ever believe it, not in a million years, so how could she get caught? And besides, it might not even work. No. Deep down she knew it would work. She set her water bottle and popcorn carefully on the desk beside her laptop. More trouble, if her parents knew she was eating in her bedroom. Stupid, pointless rules! She made a face as she settled herself in her chair and rolled close to the desk. She felt a sense of power and anticipation as she opened her “Events” folder and scanned the titles. There were three. But not like this one. Her finger tapped lightly on the mouse. She leaned back in her chair, raking a hand through her hair. She gazed at her laptop, her mouth pulled into a little pout. She righted her paper clip holder; Tinker must have knocked it over. She gathered the loose paper clips and fed them one at a time into the container. Each one jumped to the magnet with a satisfying little click and lined up around the top of the holder. She set the tape dispenser and stapler side by side, aligning their edges just so. She nibbled on her popcorn; swallowed a sip of water. She reached for the mouse again. Her other hand found its way into her hair and she unconsciously twirled a lock around her index finger. “Stalling,” whispered a voice in her head. She nodded to herself, and her right hand settled again over the mouse, fingers curled around the small device. She took a deep breath and clicked a new file open. She was surprised to realize she was singing softly under her breath; words to a Dire Straits song her mother and grandmother both loved. Without thinking about it, she titled the “Event” Louisville Slugger. Closing her eyes she took a deep breath and exhaled slowly. She took another deep breath. Exhaled. When she opened her eyes, she began to type. The pads of her fingers tingled as they moved deliberately across the keys. She stared fixedly at the screen, but her attention was on something else. Something . . . distant, and a little dark. A new story began to form. A new “Event” was being set in motion. The Fat Man was going down. He was mean and a tyrant. It was only fair. It was justice. *** Later, the girls left the house in high spirits. The day was off to a good start, in spite of its weird beginning. It was a perfect, early-May morning on Colorado’s Front Range, sunny and bright, but cool. Just right for the new sweater and jacket. The promise of the weekend was only seven class periods away. Sam linked her arm through Rebecca’s as they headed down the tree-lined street. A little breeze lifted Rebecca’s hair from her shoulders and tangled Sam’s unruly curls around her face. “Sweet,” said Sam. She lifted her face to the breeze. “Yeah.” Rebecca took a deep breath. “If only I was riding Skydancer out . . .” Sam didn’t finish the thought. Instead, she said, “Are you working on a new story?” “Mmm. Why do you ask?” “Because you usually are.” Sam was matter of fact. “Yeah. That’s me. Just lame.” Rebecca pursed her lips, her eyebrows drawn together. “It’s not lame!” Sam protested. Rebecca turned pensive. “Remember those Ariel stories I used to write? Where Laney turned into a mermaid? Now, those were lame.” “Not for a third grader.” Sam laughed. After a moment she asked, “Have your stories always been about Laney?” “Pretty much.” “She’s sort of you, isn’t she?” Rebecca looked startled. She didn’t answer right away. “You know, she kind of is,” she said at length. “But braver than me.” “How so?” Rebecca considered. “Laney’s pretty . . .” She searched for the right description. “To the limit,” she said finally. “She’ll do about anything and she never worries about stupid stuff. Like rules. Getting caught. Fitting in. You know my dad. My life is totally about stupid rules.” “Well, yeah.” Sam frowned. “Like I said, I’d trade.” Rebecca just shook her head. “When I’m writing a story, I feel free.” She smiled. “And in control. That’s totally the bomb.” “Totally.” Sam nodded. “I feel that way when I’m riding,” she said wistfully. “Free, I mean.” She was quiet for a minute, and then she said, “You did sort of have a fixation on mermaids for a while.” “You mean sort of like you’re fixated on horses?” For this there was no defense, and Sam made none. She just laughed. “You should write a story about meeting some hot guy. Not from Front Range. Mysterious. Bad news, somehow.” Rebecca’s insides tightened for an instant. She ignored Sam. “You could have Laney meet him.” Green eyes teased. “Especially since she’s ‘sort of you.’ Put her in a tight sweater and let her flaunt her assets. I assume Laney has admirable assets and isn’t afraid to flaunt them . . .?” Sam pulled her shoulders back and thrust round breasts forward. She wriggled her shoulders. Paul and Ringo’s faces danced on the yellow T-shirt. Rebecca shoved Sam playfully and pulled her jacket closer. “Laney would do it.” Sam dropped her pose and nodded but said nothing. ***

Rebecca Jean longs for fewer rules and more control in her life, so she writes stories about Laney, the self-assured, with-it girl she wishes she could be. One day, furious and frustrated, she writes a different kind of story. One of revenge. When it unfolds exactly as she wrote it, her life is forever altered. She can’t believe it’s real. Really, how could it be? Even so, she writes another story. And then another. When they play out with unerring accuracy, she feels exhilarated and empowered, but also uneasy and a little guilty. What is happening? And there are consequences, a sort of quid pro quo of which she is the target. Some stories take unforeseen twists. She is keeping secrets from her best friends. Laney steps off the page and takes up residence in Rebecca’s head. When she finds herself having conversations with this disembodied voice, Rebecca worries she has gone completely bonkers. All she wanted was a little control in her life! Trapped in an escalating mess of her own making, she sees no way out. Against the backdrop of high school dramas, best friends, first loves, and family, Rebecca searches for answers. What she finds will test her core beliefs. Will she be willing to accept what she must do to have true power over her own life?

Rainie York was born and raised in Mendocino County in Northern California. She holds a BS from the University of San Francisco. Rainie is also a Reiki Master and Reiki Master Teacher. She is a Certified Life Coach. Rainie is fascinated by esoteric information, ancient belief systems, and quantum physics, especially where quantum science discoveries overlap with metaphysical belief in relation to the power of mind. She is passionate about personal empowerment for women, writing, and energy healing. Rainie lives north of Atlanta with her husband and their three cats.