CREATING HOMES THAT SUSTAIN OUR LIVES, ECONOMY, AND THE EARTH 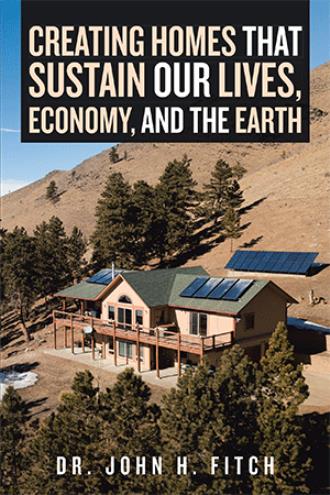 Would you like to live in a comfortable, well-insulated sustainable home that costs no more to build than a conventional home? Would you like this home to be capable of providing its own heating and cooling systems with utilities bills of less than 10 % per month compared to what they would cost in a conventional home? Would you like the energy used for heating, cooling, lighting, and cooking to be from renewable sources such as the sun and/or wind that are available right on your property? Would you like to be able to sell your unused power back to the electric grid? Would you like to know that the comfortable, sustainable home in which you are living is sustaining your pocketbook? And, finally, would you like to know that your home is also helping to sustain the Earth by using non-polluting renewable energy sources and building materials? If you answer “yes” to even one of these questions, you should read this book. I know this sounds too good to be true. That is exactly how I felt when I first became interested in sustainable homes. As a scientist, I am by no means a person with the skills necessary to build such a home. But as I discovered more about sustainable homes and their advantages, I decided I had to try having a sustainable home built for myself. I also learned you can build sustainably no matter whether you are in town, in suburbia, or in a rural area. I am writing this book for several audiences. First, if you are interested in any or all of the benefits of sustainable homes, this book is definitely for you. It will give you information on available sustainable technologies; how to select an appropriate area in which to build and a site in that area that would be good for building; how to select a good architect, a knowledgeable engineer, a reliable sustainable builder and crew; how to obtain financing; how to work with inspectors; and how to integrate different sustainable technologies and equipment into the home. This book will also be helpful to people who are considering joining the growing sustainability infrastructure of architects, loan officers, engineers, builders, building suppliers, computer engineers, and natural landscape experts. These experts are creating the foundation for a sustainable construction industry. This is a new, exciting, and expanding cooperative of experts who enjoy innovative and challenging opportunities. The sustainability approach allows us to integrate and balance environmental, economic, and societal considerations.

Dr. John H. Fitch has studied and written about ecosystems conservation, animal behavior, environmental policy, and sustainability for 55 years. He received his BA in anthropology and zoology from the University of Kansas and an MS and Ph. D in ecology and animal behavior from Michigan State University. He has served on the faculties of Michigan State University, Tufts, Florida Gulf Coast University, and Colorado State University; in leadership positions with several nonprofits including the Massachusetts Audubon Society, Mainewatch Institute, and The Conservancy of Southwest Florida. He also worked as a scientist and assistance field director with Smithsonian Institution on biological surveys of the Central South Pacific Ocean.

As a Faculty Fellow in the Carter Administration, he witnessed solar panels being installed on the White House and became committed to sustainability. He saw the potential of renewable solar and wind energies and superinsulation as a means to decrease dependency on more expensive and potentially polluting nonrenewable energies. His special interest in renewable and sustainable futures on state, national, and international levels led to his slogan: “together we can sustain tomorrow today!” To demonstrate what he advocates, he had built a sustainable demonstration home in beautiful Redstone Canyon near Ft. Collins, Colorado, which he describes in his book, Creating Homes That Can Sustain Our Lives, Economy, and the Earth.

Currently, he serves as an affiliate Full Professor at Colorado State University in the Warner College of Natural Resources Department of Ecosystem Science and Sustainability and in Morgan Libraries. He continues to enjoy his lovely sustainable home in Redstone Canyon, Colorado and has welcomed more than 600 people including CSU students to tour his sustainable home and conservation lands.