Adventures of the Saci Kids

by Pamella A. Russell 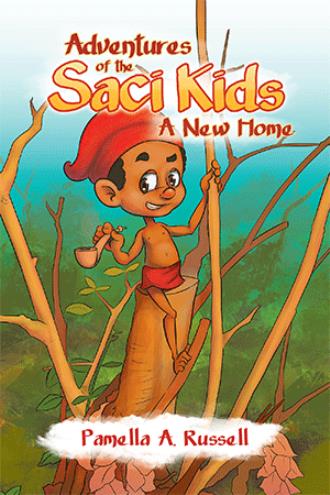 Holly walked back to the dry sand. It felt warm and gritty between her toes. She sat facing the gentle breeze of the late afternoon. She liked the way it lifted her short curls away from her face. She leaned into the wind as the tide pulled the salty water up onto the sand and then dragged the sand back into itself. She licked the salt from her lips and smiled at the seagulls standing watch along a stone jetty that rose from the sea. Holly reached into the back pocket of her shorts for her diary. She unlocked it with one of the tiny gold keys she wore on a chain around her neck, along with a delicate crucifix, a confirmation gift from her mother. The chain also held a tiny gold medal of Our Lady Aparecida (who appeared) given to her by her favorite priest who had served as a missionary to Brazil. He explained its legend to her. It had something to do with some men fishing in a river, trying to catch fish for a feast being held in someone’s honor. They prayed to Our Lady of the Immaculate Conception to give them a good catch. They were having no success and were ready to give up when, to their amazement, they fished up a broken statue of Our Lady of the Immaculate Conception. However, when they cleaned her up she was black so they decided to name her Our Lady Who Appeared. They wrapped the image carefully and thereafter began catching fish until their nets were full. It was considered a miracle. Holly believed in miracles. She began leafing through her diary. She kept others just like it in her room, locked in a cedar chest that had belonged to her mother. For the past three years, her diaries had been her closest friends. Writing gave her strength. Through the written word, she could leave her fears and shyness behind, stand up for herself in any situation, and find the boldness and power to shape her life as she saw fit—the past, the present, and the future. Writing gave her command over her destiny and that of those she loved. Unlike life, writing gave her control over her story. Soon school would begin. Holly would be entering seventh grade this year. “Another new school. Another new family,” she wrote in her diary. She remembered the day when Social Services had taken her to meet her first foster family. It was the same day her father had struck her mother repeatedly on the head and shoulders with the rolling pin while her mother was baking. Holly had hid behind the living room sofa and quietly dialed 911. The police arrested her father and drove him off to jail in handcuffs. The ambulance carried her mother’s lifeless body to the hospital. Whenever she thought of this, her chest hurt and her eyes burned with held-back tears. When the police asked Holly if she knew why her father had assaulted her mother, she said it was because her mother wasn’t making the pie he liked. That was three years ago. This was her third foster home since then. She hoped it was to be her last. She wondered when her father would be paroled and if her mother would some day recover her loss of memory. She questioned if they would ever be a family again and struggled with the conflicting answers. Holly inhaled deeply of the sea air. There was a healing quality to the rhythmic sound of the waves smacking against the sand, to the seagulls raucously calling out to each other, to the loneliness, the stillness, and the peace. She pushed herself up from the now shadowy sand with alarm as she realized that the sun had dipped low in the sky over the bay side of the island. Mom and Pop Spears, her new foster parents, would be worried, wondering where she was and what was taking her so long. Holly tucked her diary away and began running through the sand toward the road. Something dark, peaking out of the sand dunes, caught her eye. It was almost hidden by the thick beach grass. The dunes were off limits but her curiosity outweighed the rules. Taking careful steps through the grass, she walked up to it. It was the top of a small wooden barrel, poking out of the sand dune. The storm must have washed it ashore. Holly pulled at the barrel, but the sand sucked it back and held it captive—a prisoner to its surroundings, like herself. She scooped the sand away from around it and pulled again. A large cork jutted out from the side. She grabbed it and pulled with all her strength. She pulled so hard that when the barrel broke free of the sand, they both went rolling down the dune. Holly sat up at the bottom of the dune, clutching the cork in her hand with the barrel resting at her feet. The cork was bearing a sign of the cross. What could that possibly mean? Anxious to return home, Holly jammed the cork into her pocket and placed the barrel upright. It stood about eighteen inches high and was surrounded by bands of metal that looked like brass. It looked very old but appeared to be in good condition. Peering into the opening in the barrel, it seemed to be empty except she thought she could hear something rolling around inside making peculiar noises. Strange! Whatever was in there sure didn’t smell so good! Suddenly, an eerie, whistling emerged from the barrel, like someone mourning for the dead and exhaling the sound through shadowy graveyards. A shiver passed through Holly’s body. What extraordinary events had brought this wooden barrel to rest on these quiet sandy shores? Holly heaved the barrel up onto her shoulder. She would need more time to examine it and to explore the mysterious sounds connected to it.

Life is a journey, full of uncertainty. It molds and shapes our character. When confronted with difficulties, we learn where our strengths and weaknesses lie. Ultimately, that discovery helps us define who we are and what we need to be whole. Holly (11) is clever and a natural leader, but insecure; Ethan (13) is an African-American boy who is intense, defensive, and searching for self-esteem; Drew (12) is introverted and self-centered, but lonesome; Ashley (8) is generous and bright, but diagnosed with attention deficit hyperactivity disorder; Sací(timeless) is an elf standing twelve inches tall on one leg and bringing chaos wherever he lands. He’s a trickster by nature, an orphan of sorts, and a long way from home. As diverse as they all are, they have one thing in common – they are homeless. Mother and Father Spears provide their foster care. They live together in a five-bedroom Victorian farm house on the Eastern shore along with Boswell their beagle, Pitsa their tailess cat, and their barnyard animals. Henry Drudge, of Drudge’s Antiques, is a crafty business man who cheats the Spears out of Sací’s antique rum barrel until he’s confronted with one who is craftier then he is. The adventures await…

Pamella Russell is a graduate of Rutgers University, with a Master of Library Service (MLS) degree. She is also a graduate from the Institute of Children’s Literature. Ms. Russell especially loves children’s multicultural literature - books that tell an excellent story, are entertaining, and that teach something about people, life, love, pain, and the world around us. Her favorite stories are of young people that in some manner, exhibit great courage, whether through adventures, disasters, by overcoming hardships, loving the unlovable, struggling through problems and failures, but always reaching beyond the limits of their abilities and their endurance until they achieve their ultimate goals. As a teenager and young adult, Ms. Russell resided in São Paulo, Brazil for over six years where she fell in love with the Brazilian people, culture, language, and especially their rich folklore. In this story she shares her favorite folk character, Saci, made famous by the renowned Brazilian author Monteiro Lobato (1882-1948). Ms. Russell is retired with her husband and lives on the Eastern Shore of Maryland. She hopes that children will discover a new element of interest in the pages of her book, but most of all, that they will read, read, and read!!