A Brief Theory of Spycraft 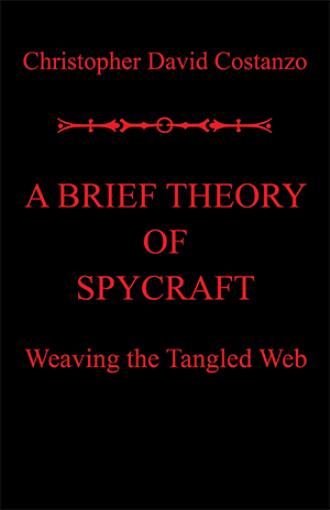 INTRODUCTION Clandestine operators do all sorts of things. They work under cover. They work under aliases. They wear disguises. They pose as nationals of other nations. They sneak across international borders. They smuggle items into foreign countries. They operate in hostile areas where they take their lives in their hands. They recruit and manage spies. They acquire sensitive information, and they covertly manipulate the course of events abroad in support of the interests of their respective countries. Much of their work entails serious risk. But they have at their disposal a body of principles and methods that has evolved over many centuries which enables them to protect themselves and to control the tangled web of deception that is the stock-in-trade of all clandestine operators. This book outlines that body of principles and methods. Clandestine operators often refer to them collectively as “clandestine tradecraft,” or simply as “spycraft.” It was Sir Walter Scott who wrote, “Oh! What a tangled web we weave when first we practice to deceive.” His observation is accurate. For that reason, good spycraft is necessary to maintain control over that inevitable tangled web inherent in clandestine operations to render them safe, productive, and worthwhile. It requires professional clandestine operators to adopt certain patterns of thought and apply much attention to detail in order to be effective. It is a complex topic and is not for the casual reader. But if you study the principles and methods described herein, it will provide a valuable insight to the world of clandestine operations. You will not find momentous revelations in this book. It is intended for those interested in the theory and procedures of clandestine operations beyond what one finds in most popular literature. It outlines the deeper fundamentals pertaining to one of humanity's oldest and sleaziest professions. Did I say “sleaziest?” Indeed, I did. Throughout history, people have looked upon clandestine activity, be it human or technical, as ignoble, degenerate, and contemptible. As late as 1929, the American Secretary of State, Henry L. Stimson, shut down a secret code-breaking facility in the State Department, stating that, “Gentlemen do not read each other's mail.” Many people regard clandestine operations as particularly odious when nations carry them out with human operatives --that is, when clandestine operators persuade and manipulate people to betray their own governments and induce such people either to gather information as spies, or else to alter secretly the course of events. Nations punish such people, and the operators who manipulate them, severely and with contempt. During the American Revolution, when the Americans caught a British Major, John Andre, spying for Britain, George Washington refused to sanction Andre's execution by firing squad, which in those days was an honorable way for a soldier to die. Instead, Washington insisted on hanging Andre ignominiously. Yet, Washington himself made use of his own spies to learn the plans and intentions of British forces in America, and to scout out enemy positions. But, as despicable as clandestine activity may seem to a well-bred lady or gentleman, nations have almost always felt compelled to engage in it. The paramount interests of a nation are its independence and security. A close secondary interest is its economic well-being. A nation may use diplomacy to protect these interests peacefully through persuasion and negotiation, or it may use war when it believes that physical coercion is necessary. But it usually finds it equally necessary to rely on espionage and covert action to support both diplomacy and war. The immediate goal of espionage is to acquire information that is not available openly and legally. It is the pursuit of information that is not available publicly and would be useful to a nation's diplomats, to its warriors, and to those who administer its economic interests. Of course, the goal is to do it without letting others know it. So, espionage is necessarily a clandestine activity. Obviously the same is true for covert action by which a nation attempts clandestinely to influence and even manipulate the course of action of another nation. Many people see diplomacy as a dignified profession because it relies on peaceful methods. And they regard war as a noble profession because of the great sacrifices of those who engage in it. On the other hand, they regard clandestine activity as sordid, base, and unscrupulous, whether it supports peace or war, because its stock-in-trade is deception, subterfuge, and intrigue. This book will explain how it all works. (Note: Throughout this book we will use the contemporary word “clandestinity,” rather than the more traditional word, “clandestineness.”)

In his new book, A Brief Theory of Spycraft: Weaving the Tangled Web, Costanzo reveals the classic theoretical underpinnings of his profession in a modern context. The book is not for everyone. It is, in effect, a mini-textbook for students and it requires some concentration. But even if not for the casual reader, it will be of interest to many government employees, to security personnel, to anyone attuned to international relations, and to serious espionage buffs. Costanzo is also the author of My CIA:Memories of a Secret Career, in which he describes what it was like to work in the CIA's Clandestine Service during the final decades of the Cold War, starting from his early training through his senior tours as a chief of station.