A Family Story Told by its Treasures 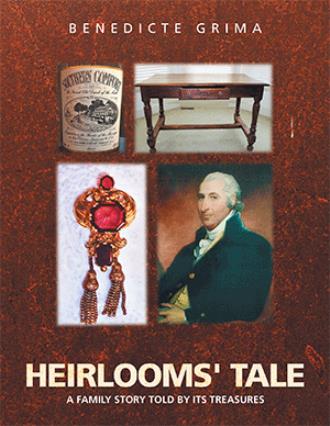 I am an ornate set of matching pink and purple jewels, known in its day as a parure, in this case a necklace, bracelet, and brooch. For five generations I served as a wedding gift, being passed on within a single family. Today I am communally owned by the same family, still taken out to adorn brides and their mothers on their wedding days. Unlike my fellow storytellers, I have been able, as jewelry, to travel the world with my owners and stewards. While worn on their bodies, I have also enjoyed the feels and smells of humanity. I have felt the mix of talc and perspiration, have smelled all kinds of perfumes and eaux de toilette. My necklace has felt the glow of pride, the pounding of heartbeats revealing anxiety, nervousness, fear, or the flustered excitement of love. My bracelet has felt the tender touch of admiring men, and my brooch has felt the burning glares of envy from other women and the pressing firmness of corseted bosoms in embraces of greeting and consolation, and men’s chests pushing into me as if to resolve their unrequited love. My necklace has also tasted the salt of tears rolling off chins to the collar bone on which I rested; my brooch has felt the labored breaths muffled in sobs as my wearers’ chests heaved erratically, making my stones quiver. With my ability to perceive emotions, due to my proximity to people’s hearts, I can relate unspoken stories. I am the label affixed to Southern Comfort whiskey bottles between 1932 and 2001. On me are written these words in cursive: “The Grand Old Drink of the South … Originated on the Banks of the Mississippi in New Orleans, Louisiana, U.S.A.” Between those two lines is the drawing of a house, clearly a Southern mansion. Although the Southern Comfort distillery is in Missouri, the house depicted on its label is the Woodland Plantation, the story of which I will tell, as well as the story of its family. The story of this family can be told only by me, since there are no family objects which were passed down—for reasons that will become clear. Even my creation is somewhat scandalous. According to Rod Lincoln, historian for Plaquemines Parish (Lincoln, 1992), I was made known in a lithograph by Currier and Ives in 1871 titled “Home on the Mississippi.” “They had a habit of taking existing drawings and changing them up a bit,” he writes (Lincoln, 1992). On May 26, 1871, Every Saturday magazine published an article describing Woodland that included a sketch and full description of the plantation house and property. Currier and Ives held the sketch up to a mirror and redrew it backwards, altering the shrubbery and people so as to avoid copyright violations in their lithograph. The folks at Southern Comfort, having only seen the “Home on the Mississippi,” purchased the right to use it on their label—me. I am a set of books. That may sound boring, but these are no ordinary books. I constitute 23 giant leather-bound volumes, two of them in Mammut size, known as elephant plates, some four feet by two-and-a-half feet, not the sort of thing you read in bed or even rest on your lap. Thirteen of them are entirely devoted to engravings. The entire collection is titled Description de l’Egypte (The Description of Egypt), published between 1809 and 1822, authored by the Commission des Sciences et Arts d’Egypte and decreed by Napoleon Bonaparte. Among the drafters and illustrators of these volumes were two young friends, Francois Guyot and Armand Alapetite. Francois Guyot was the brother of Claude Etienne Guyot (1767-1849). Francois and Armand were established young Parisian artists at the Academie Royale de Peinture et de Sculpture, later known as the Ecole des Beaux Arts, when they heard about the opportunity. The young men had to undergo a bizarre selection process. They were sent to the most undesired spot outside Paris, the slaughtering ground, to capture and draw in detail the horses and cows as they met their deaths, and then their entrails. They also had to draw the cuts of flesh as they were presented at the fly-infested markets of Paris. “A strange assignment, indeed,” complained Armand as he sloshed through a knee-deep combination of mud and animal excrement in a dawn downpour. “This one will surely cost me a new pair of boots.” “I believe they want to see how we tackle the obscure,” reasoned Francois. “They’re testing our ability to overcome the conditions and focus attention on the object at hand. Stop thinking of your boots and focus on the reward. We will see the world! We can do this.” The two friends were selected and sailed with Napoleon’s mission of to Egypt, where they participated in forming the Institut d’Egypte outside Cairo and established their headquarters. Armand, unfortunately, met his fate with mosquitoes along the Nile River and died from symptoms of malaria, while Francois, although suffering a brief bout of cholera, produced a large number of drafts and drawings which were put onto plates and included in the first edition of the great work, The Description of Egypt. When Francois made it home, as compensation for his efforts, he was honored with me, a full set of the massive volumes, and as he had no children, he left these to his nephew, Eugene Guyot (1800-1876). “These books are for you, lad, offered the aging Francois. “I cannot hold on to them, and they must stay within the family. They are proof that we Guyots participated in Napoleon’s momentous mission to Egypt. Keep and display them with pride.” “Where shall I put them, Uncle?” asked Eugene, daunted by my gargantuan size. I can’t just line these up on the bookshelves in our library.” “You’ll have to lay them flat on a table and stack them high, all twenty-three volumes,” replied his uncle. Inheritance was already proving to be an onerous burden.

Six heirlooms – a portrait, a table, a parure, a whiskey label, a set of books, and a building -- tell the stories of six branches of a family whose possessions lived through three centuries and eventually came together under one roof before dispersing again. These items have survived through generations and witnessed their owners as they evolved through history. In addition to the lives of their individual owners, the stories also cover certain historical and cultural figures, both American and French: slave traders and plantation owners, merchants and financiers of New York, whiskey distillers, Creoles of Louisiana, wreckers off the Florida Keys, drafters on Napoleon’s mission to Egypt, French lawyers and politicians, World War II fighters, and CIA spies. The book pays homage to the heirlooms’ past owners; it also examines the culture that surrounds families of wealth and status and the fierce struggle to retain these advantages through marriage ties. The stories pay homage to the heirlooms’ past owners.