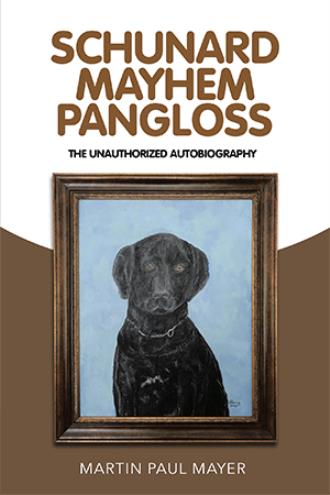 Like magic, a black Labrador retriever appears at the dilapidated plantation house, Muscadine Hill, in the Deep South. In his autobiography, SCHUNARD MAYHEM PANGLOSS chronicles three years of life in a small southern town and the transformation of his miserly and misanthropic adopted Dad. Since Dad is opposed to having a dog, especially in the big house, Schunard begins life at Muscadine Hill in the messy garage, roommate to an aged Rolls-Royce. Schunard, simply through his loyalty, humor, and enthusiasm for life, gradually works his way into Dad’s heart and home. Instead of returning home from work to boredom and an empty house, suddenly he is wrestled to life by Schunard’s unbounded joy. Even the forest surrounding Muscadine Hill becomes an enchanted place for daily exploration. It is entirely coincidental that Schunard Mayhem Pangloss and Martin Mayer share names with characters in Voltaire’s Candide. It is even more coincidental that Martin and Schunard Mayhem Pangloss have much the same personalities as their like-named characters in Candide; Martin is thoroughly pessimistic, while Schunard Mayhem Pangloss views the world with usually unsubstantiated and often bizarre optimism. Despite misfortunes, Schunard Mayhem Pangloss sees this, as does his namesake, as the best of all possible worlds. A less than enthusiastic motoring companion, eventually Schunard concedes to ride in Dad’s Blue Mercedes. Because of a worrisome premonition about Dad’s red truck, Schunard will only travel in the Blue Mercedes. Journeys in the aging Blue Mercedes often end up in disastrous breakdowns involving enormous inconveniences and discomforts. Unfortunately, the rewards for cooperation and learning to ride in an automobile were trips to the veterinarian. His graceless recoveries strengthen the bond of friendship. Upon returning home from their first road trip, with the bonding process well under way, Schunard takes up residence in the big house. All activities are planned around Schunard’s preferences. Weekends become major events, with visits to state and local parks and historic towns. Even mundane shopping trips become expeditions for the two inseparable companions. The Walk, an almost ritualistic routine, includes Dad’s arrival home from work, the greeting (which usually involves the tearing of an article of clothing), the attempt to change into walking clothes, the overturning of furniture while racing to the door, the walk in the forest, and lastly, the disruption of any chores that Dad might attempt to perform. Dad works as a counselor at a local high school. As the new school year begins, Schunard frequently goes to work with Dad and becomes a popular mascot. Attending classes or patrolling the library, Schunard is a favorite visitor at The Capital Day School. Even though he often steals their snacks and lunches, students look forward to Schunard’s visits, which lend a crazy excitement to the otherwise uneventful school day. Schunard perpetrates stunts at football games that rival the excitement of touchdowns and vies for the attention of fans. Perhaps not all parents, but all little children love Schunard and consider it an honor for him to lick their faces. Although it is not an efficacious partnership, Martin and Schunard gradually return the plantation to its former grandeur. Projects are complicated as eighty-eight-pound Schunard usually attaches himself to the tool which is being used. A hose cannot be reeled in nor an electric drill positioned without Schunard tugging at the other end. Gradually, despite Schunard’s distractions, Muscadine hill becomes a showplace. Schunard’s favorite activity is the performance of devilments, which range from stealing articles of clothing, shoes, tools, food items, to creating public embarrassment by reclining in the middle of streets or parking lots and refusing to get back in the car, or rolling around in smelly goop. Schunard’s willfulness becomes an issue for Dad and together they enroll in obedience class. Through Schunard’s misdeeds, he and his Dad become obedience school dropouts. Even with his disobedient disposition, Schunard hobnobs with members of Jackson’s high society, including outings with judges (sometimes involving felonies), picnics with the symphony management, attendance at ballgames and theater performances at Dad’s school. To each event Schunard adds his slapstick pranks and hilarity. Tension builds as health problems make life together increasingly difficult. After a couple of mysterious and apparently serious illnesses, Schunard develops an occasional incontinence problem. Seeking all sorts of veterinary advice, Martin finally gives up when the treatments seem extraordinarily invasive, cruel, and dangerous. Martin and Schunard attempt to adjust their lifestyle to minimize the problem, however, there is always anxiety caused by the random nature of Schunard’s problem. Anxiety and Schunard’s embarrassment about his problem causes a growing strain in the relationship. Schunard begins wandering unsafely and carelessly because of the stress at home. Out of fear for Schunard’s safety, Schunard finds himself confined to a pen while Dad is at work or away. Schunard, much to his Dad’s consternation, continues his wanderings, sneaking out beyond the fence at night. Almost exactly three years after his arrival at Muscadine Hill, Schunard is struck by a car and killed. The reader is left wondering if Schunard’s death was accidental or intentional and precipitated by his growing anxiety. As Dad brings Schunard’s body home in the red truck, the premonition is fulfilled. Schunard wins the hearts of everyone in his small Mississippi town, and breaks their hearts with his premature death and heart-wrenching funeral. All the first families of Jackson come to the gardens of Muscadine Hill for Schunard’s memorial service, which is sadder, yet more elegant and dignified than most funerals for people. Desolate, quiet, and still, Muscadine Hill settles into deep mourning, symbolized by the black sashes tied around the finials of the gateposts. Life will never be the same again. Dad is truly heartbroken, left alone on the old, lonely, now sadly beautiful plantation. Schunard sees his Dad from the beyond and attempts to offer consolation. In the few months that follow his death, Schunard channels this diary to his Dad, sharing these memories of his enchanted life in a simple and peaceful world, the best of all possible worlds.

The appearance of a black Labrador retriever, SCHUNARD MAYHEM PANGLOSS, at the dilapidated southern plantation, Frazier Hill, signals a great transition in the life of miserly and misanthropic owner Martin Mayer. Schunard relates stories about three years of life and travels with Martin. Beginning his life in the garage, Schunard gradually wins his way into Martin’s heart and into the big house. As his middle name implies, Schunard Mayhem is the master of slapstick antics, with a penchant for creating chaotic and hilarious scenes everywhere. It is a literary coincidence that the real-life Martin and Pangloss share names and personal attributes of similar characters in Voltaire’s Candide. As does his namesake in Candide, Schunard Pangloss interprets the events of life philosophically, sharing his crazy and often ill-founded optimism in contrast to Martin’s pervasive pessimism. Schunard wins the hearts of everyone in his small town, and breaks their hearts with his accidental death and heart wrenching public funeral. Despite his tragically short life, Schunard communicates the simple vision of a gentle and peaceful world, as Voltaire would say, “the best of all worlds.”

Dr. Martin Mayer, a native of New Jersey, lived in San Francisco for twenty-one years before making his home in Montgomery, Alabama. Educated at Bowdoin College, Fairleigh Dickinson University, and The University of San Francisco, Martin has had a thirty-five year career as a teacher and counseling psychologist.