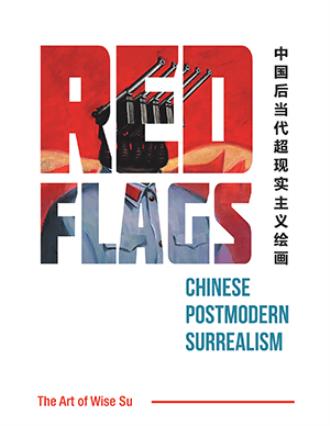 An elegant and perplexing painting, The Witch Hunter’s Dilemma is one of 170 paintings in a newly published book Red Flags, Chinese Postmodern Surrealism, the Art of Wise Su. The painting depicts figures from Eastern and Western cultures meeting in an imaginative scenario. The female figure, a sensuous nude who reaches back to raise a tress of dark hair is taken from Nude before a Mirror by Balthus, a Western modernist known for his sophisticated eroticism. The man she faces is Zhong Kui,a legendary figure from the East, traditionally regarded as a vanquisher of ghosts and evil beings, a hunter of spirits, ghosts, and witches. Su, who is well-versed in the art of both cultures, has brought them together to generate questions and make those questions come alive in a contemporary context. In the painting, Zhong Kui is no longer a demon hunter, but instead plays the role of a policeman or detective. The young woman he encounters activates him with her nudity and vulnerability. Zhong Kui pulls back his sword and restrains his tiger while he considers his options. What the artist has done is to locate the deeper meaning of each figure in order to create a form of mythological narrative that can be applied to the moment we live in. The dilemma faced by Zhong Kui is like those that police in China and Hong Kong face when they face disruption in the streets. Should police in these situations be loyal to power or to protest? Are the young people they meet in the streets to be respected or arrested? Can vulnerability and innocence serve as shields from authority? In his book, Su calls these paintings Déjà Vu, a reference to the French phrase that translates literally to ‟already seen.” The titles of many of the works in this book, such as Sins of the Father, Big Brother Sees All, and The Ruling Elite: Parasites make it clear that Su is also a social critic who goes beyond simply raising questions. He is also a moralist who does not hesitate to judge or criticize. For example, his painting Two Pinocchios shows Mao Zedong and Richard Nixon both sharing a single very long nose, symbolizing the artist’s assessment that they were both liars. Wise Su’s work was influenced by the Chinese Cultural Revolution and his experience living in the United States. The political oppression that he once experienced and his cross-cultural worldview prompted him to combine abstraction and absurdity in his works. The wonderful settings in his portraits reflect a dark utopia of boundless good and evil. He uses contemporary art to reexamine the beauty from the symbolism of Chinese culture. Combining myths and images and making them relevant again, across time and culture, is an exercise that has occupied Su for nearly a decade. He sees art as a kind of safe space to search for the questions and quandaries that underlie the grand forces at work in the world today. Although Su and his art don’t easily fit into any single category, he is best described as a postmodern surrealist since his art appropriates existing imagery into dreamlike and imaginative narratives. Wise Su is a singularly appealing, influential, and mysterious surrealist artist in today’s China. Having grown up in mainland China during the difficult era of the Cultural Revolution, Wise Su has a deep understanding of the essential conflicts between culture and politics. After studying painting and illustration in Shanghai as a young man, he moved to the United States, where he earned his doctorate, raised his family, and has since resided. His book, Red Flag, represents both his mature vision as an artist and his warning to today’s young people across the world. Life and experience have shown him that when authority and culture collide, art can serve as a tool to both warn and inspire us. Perplexing pictures like The Witch Hunter’s Dilemma can embody the universal truths to be found in the art and culture of the past and make them resonate in the hearts and minds of the people.

This book presents Chinese postmodern artist, Wise Su’s 168 pieces of impressive surrealist artworks. Each painting has an artist’s explanation. The political oppression that the artist once experienced and his cross-cultural worldview prompted him to combine abstraction and absurdity in his works. The wonderful settings in his paintings reflect a dark utopia of boundless good and evil. He uses contemporary art to reexamine the beauty from the symbolism of Chinese culture. The book has three sections: 1. The Déjà Vu combines famous paintings across space and time to express a form of virtual scenes. 2. Trumpet Kingdom is a land, where people are brainwashed without their own thoughts. 3. Migrant Workers expresses the artist’s sincere sympathy for Chinese migrant workers, who are treated unfairly.

Wise Su a singularly appealing and mysterious surrealist painter. Born in China, he studied art and architecture in art school and university and late received a master’s and doctorate degrees in the US. His artworks were exhibited over the world, and he was an art professor at three universities.

He experienced two different social systems. Under the Chinese dictatorship of the first half of his life, people did not have basic rights and freedom. During the Cultural Revolution, the people suffered injustice and inhumane persecution.

In the second half of his life, he is in the US and happily breathing the fresh air of universal values: freedom, democracy, and justice. As an artist, he can finally express his heart, beliefs, and ideas freely!

With the help of his deep understanding of Eastern and Western culture, his postmodern surrealist artworks can transcend space and time with scenes people have never seen before but feel familiar with. Wise Su’s artworks and the contact information can be found below: