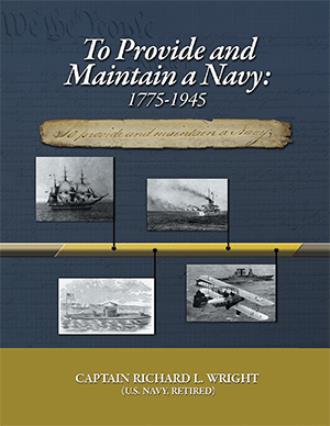 The United States Navy evolved from an ill-formed collection of merchant vessels, privateers, and small frigates into the most capable maritime force in world history . The author employs an historical narrative that describes this evolution of American warships, technology, and force structure as opposed to the battles or tactics in which they engaged.

He examines the history of the U.S. Navy from the perspective of the American people and their elected and appointed political leadership—the President, the Congress, the Secretaries of the Navy— and the captains, commodores, and admirals who carried out their directives, as well as the changing nature of the naval establishment, physical infrastructure, and human capital that constituted the industrial base in each era.

The U.S. Navy is our nation's first line of defense, composed of the most capable aircraft carriers, surface ships, submarines and naval aircraft ever built. It represents an enormous investment of our nation's treasure, but is designed, built, and operates largely out of the public eye. Naval professionals and students of naval history should learn the forces that determine ‘how’ and ‘why’ we build the ships and aircraft we do, and their true value to the American taxpayer.

Captain Richard L. Wright, USN (Ret.) is a 1973 graduate of the U.S. Naval Academy at Annapolis, Maryland, and holds an MA in Naval Intelligence and International Security Affairs from the Naval Postgraduate School in Monterey, California. In a twenty-eight-year naval career, Captain Wright served in numerous command and staff billets ashore and afloat. At sea, he commanded an anti-submarine warfare frigate, a strike destroyer, and a destroyer squadron. Ashore, he served on the staffs of secretary of the navy, the chief of naval operations, and commander in chief, U.S. Atlantic Command. Retiring in 2001, Captain Wright became a general associate at Strategic Insight Ltd., a technical consulting firm headquartered in Arlington, Virginia.