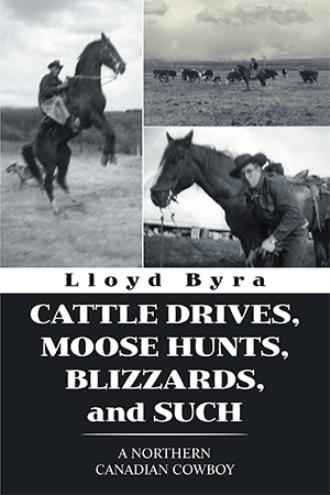 The calf moose was my target as it was still small enough that I could handle the butchering that was yet to come. Squatting down beside a tree, my rifle lined up, I waited for him to step out from behind the willows. I could wait there all day as I was sure that I was going to get some game despite the previous blunders. Still being new to big game hunting, I was unaware of the noise animals can make or that I might be in any danger. Totally oblivious to any noises around me, I was so intent on waiting for the calf to make a move so I could get my shot. Suddenly this weird sound and the breaking of brush got quite close to me. I had no choice but to divert my attention to the animal that was approaching. Standing up and turning around, I could see the antlers of a very large moose approaching. It seems I was between him and his family. He was grunting, his antlers knocked against the trees as he came. Naively, I did not know to be scared. The big Bull Moose came to within 100 feet when he stopped. This was my chance! Up came the rifle and I fired too hastily. Darn! Nothing happened. I levered in another shell, shot again and the moose dropped. Having had some experience helping to butcher animals on the farm I knew that it was best to cut the jugular vein before the heart quit beating. Fortunately in hurrying to get to the moose, to do this, I kept my rifle with me. When I was within six feet of the bull, hunting knife in hand, all hell broke loose. The moose wasn’t dead yet! He came up on his front legs, his eyes seemed to be glowing a fiery red, and with a loud “whoosh,” he tried to lunge at me with his horns; since he was injured and could not get his hind legs under him to stand. Were it not for that, I wouldn’t be here telling this story. I leaped back a short distance and started firing wildly at him. Even though I was scared and shaking violently, I knew that I wasn’t hitting him so steadying the rifle against a tree I pumped a number of shots into him, knocking him down. He still trashed around. Having only a few shots left I backed out of there and quietly crept AWAY. I didn’t know if the moose was still going to get up and come after me. Finding a fire-killed pine tree with branches low to the ground, I tied the rifle to my belt and climbed up the tree. I was still sitting on a large branch when the sun broke over the horizon. It was a very cool fall morning. Picture this: a skinny kid, up a tree, shaking so hard he could see his shadow shaking. I could still hear the moose thrashing around close to an hour and then he quieted down. Had he gotten up or had he finally died? Another 20 minutes went by. All remained still. Ever so quietly, I crept down out of the tree, with the gun loaded and cocked; I cautiously started creeping out of the wooded area. I’m sure an Indian couldn’t have been any quieter. As soon as I reached the open country I started to run as fast as I could, still looking over my shoulder to see if I was being chased. At last the ranch came into view and I slowed down to a walk so I could catch my breath. Inside the cabin, sitting down trying to figure out what to do, I felt quite sure that I had killed the bull moose, but how was I going to find out since I was still too scared to go back there again? The first problem to deal with was to catch Mac the horse. With a bucket of oats I went out to the pasture where he was grazing with the saddle still on and the reins dragging. I tried to coax him with the oats but he was having nothing to do with me even if I did have a treat. The poor old horse had gotten just about as scared as I had. After about an hour of coaxing in a soft begging voice, I convinced him I wouldn’t make him go back there again. I took the saddle off and turned him loose in the corral with his team mate “Pat”. Returning to the cabin, I made some lunch and began to rationalize the situation. The moose was probably quite dead. After much deliberation, I had an idea. I would saddle up Pat using the same procedure with rifle in the scabbard first. Assuming that Mac had not communicated to Pat the turn of events, it should work. I was going back there with all the ammunition I had, the gun, the butcher knife and our Border Collie cattle dog, “Tippy”. I still hadn’t figured out how things would go once we got there.

Lloyd’s daughters used to ask him, “Dad, what was it like when you were growing up?” Usually, the answer was quite extraordinary. Lloyd Byra grew up in a different era and a very different reality from that of most Canadians. These collected stories are his memories of growing up in a pioneering family, in one of the last homestead areas of the far north: BC’s Peace River Country. From his father’s dream of a better life for his family, through the chilling realities of northern winters, to the hardships of building a ranch on the Umbach Creek (formally Squaw Creek), these stories offer a glimpse into his life. Share in the dangers of that first moose hunt, the adventures of the cattle drives, and joys and triumphs found along the way.

Lloyd is a “been there, done that” kind of guy who went from homesteading to various pursuits and eventually returned to the land raising Arabian horses. He tells it like he remembers it, no frilly words, just as he talks.

The book describes his immigrant parents’ struggle in northern British Columbia, the good and bad of growing up there, and his knowledge/love of animals. There are the challenging cattle drives, breathtaking moose hunts, and endearing family encounters. Worried that his stories would be lost and his grandchildren would never know this part of their heritage, Lloyd has put pen to paper in order to enrich the lives of his descendants.

He acknowledges the people who helped shape his life and who played an intricate part in his development as a cowboy and businessperson.