Arnie: Pearls and Luggers in the Torres Strait 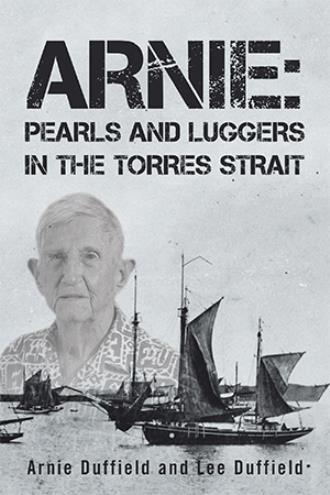 Arnie Duffield, the personality at the heart of this story, recalls the halcyon days of the famous pearling boats, the luggers, in Torres Strait, off the Northernmost tip of Australia. In 2021 aged 95 he could claim to be the “last man standing” from when the fleet would depart under sail. Transported to far-away Thursday Island, the main settlement, with his family at ten years of age he remained in the region for over 70 years. His story is set in a context of dramatic historical events, of the Great Depression, boom times diving for pearl shell and pearls, too-close involvement in the Second World War, ups and downs of business including ten years pioneering the pearl culture industry, and encountering an ecological crisis. Arnie’s father, Ernest James Duffield, had been attracted to Thursday Island in the Depression era through a very good job offer from a pearling company, installing marine engines. Later with his two sons, Arnie and Jim, he would found and operate an independent flotilla of eight luggers, most of which were built or reconstructed with their own hands. A Master Mariner and engineer like his father, Arnie capped his career in occupations connected with emerging tourism -- an industry offering sustainable relations with the sea and the bush. Most notably he served as engineer and first officer on cruisers making day trips to the Great Barrier Reef. Episodes of delight, as when building and racing small sailing boats in the prevailing strong winds, are matched with difficult times. At a young age he worked on preparations for inevitable attacks on the islands during the Second World War, ferrying ammunition to artillery batteries on the islands, or taking boats out of harm’s way, to eventually be scuttled. Evacuated to the frontline war-time port of Brisbane he worked as an apprentice, mostly seven days a week, repairing damaged Australian and United States warships – finding time also to skipper ferry boats during a shortage of crews. Achieving prosperity in the pearl culture business he then saw it broken by the impacts of an oil spill, from a tanker that foundered on an uncharted rock. At sixty he lost his wife Marie in an outbreak of Legionnaires’ disease. Yet the story is full of humour and hope, very strong for its authenticity. Arnie speaks with utter assurance on the life of the sea and ocean industries, and the luggers - his testimony invaluable in preserving knowledge of these craft. Only sixteen Torres Strait luggers are known to be still in existence out of hundreds that once plied the seas. The story also provides much about diving and the ever-present threat of loss, from the ‘bends’ under water or other accidents. It depicts a cosmopolitan life in one far corner of the world, the mixture of cultures, Asian, European, Indigenous, others, drawn by the lure and lustre of pearls. The ‘straits’ could be seen as exotic, full of mystique, and were actually the location for two romantic and successful films. The setting is ‘Northern Australia’, an ‘other Australia’, where ‘European’ Australians, however powerful and influential, are a minority. The narrative registers achievements of the region’s dominant Indigenous community, retrieving land, removing vestiges of a colonial time, getting due access to freedoms and prosperity – importantly winning the Mabo Native Title case in Australia’s High Court. The tropical life enjoyed by Arnie Duffield provided excitement and stimulus amid the dangers; material for yarns, about crocodiles or sharks, drunks, bad weather at sea, a near-drowning and a few close shaves on bush air-strips. He became a leading personality in this world, a practitioner of the wisecrack, most proud of his metier as a “proficient ship and general engineer”. The book hopes to please its readers with two gifts: the presentation of a distinctive and memorable personality, living a rich and eventful life, and a rendition of how things were, generally, in that unique place, at a distinct point in history. It is assumed that the Torres Strait, with Thursday Island, called Waiben in the traditional nomenclature of the region, will always strike the imagination. For Australians that is because of its remoteness, while still ‘within the country’; because of the wealth from pearls, and the multicultural community able to face towards the outside world, as much as towards Australia further South. The book is authentic as a source on the subject of Torres Strait since the 1850s, drawing on the exhaustive recollections of a leading participant in the regional experience. Arnie Duffield shows a keen memory for essentials, about boats, places and the way of life; a sensitive appreciation of people around him; great humour, and thorough knowledge of what after all was his calling – to go out looking for gems from the sea.

This is the story of Arnie Duffield, who arrived at Thursday Island, in Torres Strait, the Northern tip of Australia, aged ten, in 1936 - beginning a life-time of adventure. His father worked on the famous sailing luggers, diving boats that harvested pearl shells and pearls for over 100 years up to 1980. Arnie with his father and brother, with their own hands would build their own flotilla of luggers, to operate as a family company over eventful decades: seeing the Great Depression, war and the immediate threat of invasion, a post-war boom in the region, the loss of divers and constant striving for safety at sea, failures of an industry, mounting threats to the environment. For ten years he managed an innovative project cultivating pearls for jewellery, a change from selling shells, the `mother of pearl' used for buttons and ornamentation. The tropical life provided excitement, stimulus, dangers; material for yarns, about crocodiles or sharks, drunks, bad weather at sea, a near-drowning, a mercy dash in a fast boat to save a downed pilot, and a few close shaves on bush air-strips. Arnie became a leading personality in this world, a humourist and practitioner of the wisecrack, always quick with a come-back. From childhood days observing the hectic life of the far-away little port at Thursday Island, Waiben under its traditional name; then working as a young man, repairing warships, and operating the family-owned boats, he became, he would proudly state, a master mariner and proficient ship engineer. He would revel in the island life, enjoying great freedom, getting successes and hard blows; in private life, marrying, starting a family, experiencing the stresses and joys. At 95 he is known as the “last man standing” from days when the fleet would depart under sail.

Arnie Duffield recalls the halcyon years of the famous pearling boats, the luggers of Torres Strait, in Northern-most Australia. At age ten he journeyed from his home in Brisbane, with his parents and elder brother Jim, to the remote township on Thursday Island – Waiben in traditional language of the region. In those Depression years, his father Ernest had been offered a new, high paying job as principal marine engineer with a pearling company. With his two sons, Ernest later built his own pearling fleet of eight boats, doing most of the work themselves. Arnie remained in the ‘straits’ for 70 years. In war-time he worked preparing defences against the inevitable attacks on the islands. Evacuated to Brisbane he was apprenticed to an engineering company, repairing allied warships, becoming, he said, a “proficient ship engineer”. He prospered during boom periods in the diving industry, and in cultivation of pearls, then suffered through down-turns. His sea adventures were complemented by long land journeys across Australia’s “top end”. His later occupations were connected with tourism, offering sustainable relations with both sea and the bush. Indefatigable, Arnie would become a leading personality in the remote North, a humourist and yarn spinner. He married, raised a family, and, after the last working luggers had put to sea, moved into late retirement at Buderim in South-east Queensland. He collaborated writing this book with a younger cousin, Lee Duffield, a long-time journalist with the Australian Broadcasting Corporation. Lee Duffield had been the first news editor on the ABC’s youth network Triple-Jay, and its European Correspondent at the fall of the Berlin Wall. He later taught Journalism at the Queensland University of Technology, writing articles and books across many subjects, including communications issues in the South Pacific islands – and would also spend much time on boats.