Poems and Pieces to ponder 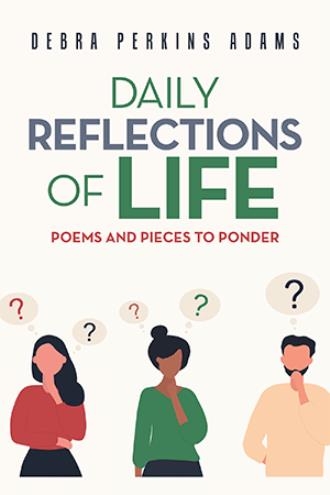 The information about the book is not available as of the moment.

Debra Perkins Adams taught her first class on her front porch at the age of five. Equipped with a table, a chair, a group of pretend students, and a great sense of passion and conviction, she taught them all that she knew. No one could tell Debra that she wasn’t a real teacher. Following in the footsteps of her first teacher and mentor, her father Mr. Donald L. Perkins, she eventually became a classroom teacher, serving special needs learners in the New Orleans Public School District for 15 years. In January of 1996 she was appointed Human Resources Coordinator for 81 elementary schools. She was responsible for hiring teachers for all 81 schools. She truly enjoyed this role. Having the privilege of selecting the best teachers for students was her joy. On August 29, 2005, Hurricane Katrina ripped through New Orleans and changed the course of Debra’s life. She relocated to Atlanta and became a Program Manager for the Boys and Girls Club of Metro Atlanta. She returned to New Orleans in 2007. Upon returning to New Orleans, her work continued as she filled several roles in the Human Resources department for the Recovery School District. These positions included: Coordinator for Certification, Coordinator for the Teacher Support Center, Human Resources Director, and Coordinator of the Parent Center. Additionally, she worked with Advance Innovative Education as a mentor and coach to future school leaders. In November 2009, her vision met her desire when she started The Teacher Place, LLC. The program is currently in the developmental phase, and once it’s completed it will be a one-stop-shop for teacher support. She loves children and is very passionate about the growth and development of teachers. She believes that investing in children is one of the greatest investments an adult can make in life. It is for her own children and those like them that she has committed her life to education. In total, she was served in the education system for over 33 years. Debra’s assignment continues as she works to effect change in the New Orleans Public School system. She is forever grateful for the love and support she received from her parents Mae and Donald Perkins, Sr., who planted the seed to love children and people. Although she is recently retired from the Louisiana education system, she still continues to mentor leaders, write, and speak. She is enjoying being not only retired but re-fired to do as God leads. Her program, PenwithanIMPACT, will soon be fully operational. She currently has blog that operates under the program’s name. She also has a couple of published works and looks forward to releasing more. Debra has two adult children, Jeremiah and Jessica, who also have several scribal gifts operating in and through them. She looks forward to the full releasing of their strong prophetic and writing voices in the future. Within the last few years her gift of seeing has been enhanced through photography (seeing God in everything) through events she attends (recording family legacy), dancing, the clouds, the trees, and whatever else God leads her to capture. These pictures along with framed scriptures, allow others to be encouraged through the Word and the Glory of God seen in everyday life. Debra’s burning passion for this season in her life is to help other scribes to awaken and arise to who they are in Christ and all that God has placed on the inside of them to release to the souls assigned to them. Debra Perkins Adams is a prophetic scribe who uses the voice God has given her to comfort, encourage, and exhort those who are assigned to her prophetic voice and writings. Through her pen, she speaks what the Holy Spirit has given her, whether it’s during the night, through a sermon, during trials and triumphs in everyday life, about current events, or just a few words randomly placed in her spirit. God also uses Debra to release the prophetic word to others through prose. It is a unique gift that touches people on a personal level. When she writes and when she speaks, she has one motive in mind and that is to lead others to Christ and to help strengthen their personal relationship with the Father through the Holy Spirit.