The Case Of The Emperor’s Scepter 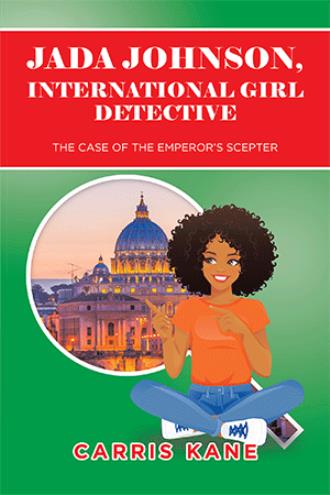 The fresh water of the lake had a smooth, velvety feel that was very different to ocean water. It was also murkier than salt water and the floor of the lake was covered in tall algae. Fish darted in and out of the wavy green fronds. The water was opaque with sediment so Jada had to concentrate to follow Carlo. She was grateful he was wearing bright yellow swimming trunks. They swam down through the murky depths, and as they descended, the water became clearer and colder. After paddling for a while, they spotted the outline of a stone structure. It was the submerged villa. They swam through a window and entered a small room, and Carlo shined the light around. The floor was covered in a thick carpet of algae. Protruding from the green vines in the corner was a large object that looked to be made of terra cotta. They swam over to investigate it. It was a broken vase lying on its side, and algae was growing inside of it. Carlo pointed the torch at the wall, and fragments of color caught in the beam of light. The wall was partially covered in mosaic tiles. The colors had faded and some of the tiles were broken so they were unable to tell what the mosaic had once depicted, but it was a stunning discovery nevertheless. Despite the years that had passed and the toll being submerged had taken, it was clear that this house had once been beautiful. There was a large rectangular hole in the left corner of the room that was probably a doorway, and they swam over to peer into the dark depths that lay behind it. Despite the torch they couldn’t see very well inside. Carlo shined the light on the pressure gauge of his oxygen tank and then held up his fist to Jada, a signal that he had a quarter of a tank left. He shined the light on hers and she had about the same. They looked at the doorway, then at each other, and Jada shook her head. They had no idea the size of the villa, there was very little light and it would be disastrous to get lost inside a possible labyrinth of rooms and then run out of oxygen. Carlo pointed the flashlight at the window through which they had entered, and they swam toward it. Carlo went through, but as Jada was passing through behind him her foot got tangled in something, and she was stuck. Thinking it was algae, she tugged her leg. Not only did her foot not budge, but she felt something cold and metal clamp onto her ankle. Jada pulled with all her might but the metal ring around her ankle was attached to something immovable. She squinted behind her scuba mask and noticed fronds of algae underneath on the lake floor parting in a line away from her. Jada knew the creature swimming away was no fish. Carlo realized she was no longer behind him and doubled back to find her half out of the window, half inside the house. He signaled for her to follow him, and she frantically motioned downward to her foot. Carlo shined the light to find that around her ankle was a rusty metal ring attached to a chain. He swam down into the forest of algae to discover the chain was attached to a metal ball twice the size of a large bowling ball. Jada had been manacled to the floor of the house. Carlo handed Jada the light, and he pulled on the chain as hard as he could, but the ball was immovable. Jada put the light on the window ledge so they could both pull with two hands, but the ball barely budged. It would take three or four strong people to lift the weight. Jada grabbed the light again and checked her oxygen gauge. She was now at an eighth of a tank. She showed her gauge to Carlo and saw his eyes widen in alarm. He mimed to her “a little bit” using his forefinger and thumb and then pointed away. She didn’t know what his plan was, but at least she knew he was coming right back. Jada didn’t want to waste oxygen, so she didn’t try to pull anymore, but she did test each link of the chain to see if there were any weak ones. The chain was rusty, but sound. Carlo came back carrying a rock and began pounding at the chain. Jada was still, but her mind was whirring. She had an idea, and if it worked she would have her mother to thank. She swam down to Carlo and tapped him on the shoulder, motioning for him to stop banging. The bracelet part of the manacle was loose on her ankle, but wouldn’t fit over her foot. She pulled off her right flipper and pointed her toes as hard as she could, causing her heel to retract a little. She was able to start easing the ring down, rusty metal scraping her skin. As she continued, it felt as if the top of her foot and her heel were being crushed by a vise, but finally she was able to pull the ring off, taking off a layer of skin from the side of her foot with it. Carlo grabbed the flashlight and they swam out and up, both holding their last inhalations from their oxygen tanks. They broke the surface of the water, ripped the useless mouthpieces from their mouths and gasped for air. Jada’s foot was scraped and bleeding, she had lost a flipper, but she was free. She silently thanked her mother for the genetic gift of slim ankles and narrow feet as well as for the years of forced ballet lessons.

Jada and her family have joined her father on a business trip to Italy. When an ancient scepter is stolen from a museum right in front of her eyes, Jada becomes more than a witness. Aided by clues in verse, a puzzle, Snapchat photos and WhatsApp messages from an anonymous amica, Jada and her new friend, Carlo, search for the scepter in and around Rome. Along the way, they must fend off attacks of a Roma girl, a Bulgarian henchman and others intent on doing whatever it takes to stop them from finding it. Can Jada recover the scepter and uncover the thief before it’s time to leave Rome? Join Jada on an adventure that takes her to underground catacombs, jet skiing on the Mediterranean Sea, scuba diving in a volcanic lake and to Rome’s famous monuments as she solves a mystery and saves her father’s business deal in the process.