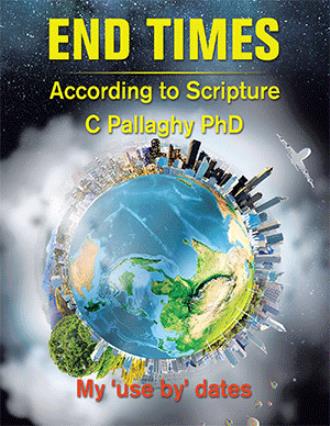 Revelation concerns things that Jesus considers essential for those heading into the end-times, hence His 7-times repeated admonitions to hear and keep the words of the prophecies contained in the book. The number seven is code for fullness or completion, hence Revelation is copiously filled with 7’s: 7 lampstands, 7 stars, 7 churches, 7 seals, 7 angels, 7 plagues, 7 trumpets, 7 thunders, 7 vials, a 7 times hotter Sun (Revelation 16:9; Isaiah 30:26), etc. Some ground work must begin to be laid to prepare us for what lies ahead. It can’t be achieved overnight with a sermon or two. We should begin to tackle those things in Revelation that are already abundantly clear. In order to achieve that, we must also revisit important aspects in the Old Testament that shed light on end-time prophesies. Sadly, many of those foundations are missing or have simply been set aside as superfluous in our enthusiasm to forge ahead and win new generations of Christians. A proper scriptural understanding of the creation is essential to understand the prophetic patterns of 7’s that the Feasts of the Lord and God’s Grand Plan for world history are based on. The Hebrew religious or sacred calendar is comprised of only 7 months which completed the annual spiritual cycle of Israel, thus reflecting that world history is also based on 7 seasons of time. This book contains a scriptural examination of both the beginning and the end of the Bible, in a progressive manner, building up simplified time charts leading up to our current decade. We can predict the season of the Second Coming but not the year. Admittedly, Revelation is a fearful book, but it is also a most glorious book establishing that Jesus and those who follow the will of the Father will be triumphant. Even in the midst of the most horrible catastrophes to come the angel cries “rejoice you apostles and prophets” because, with every page forward, we are closer to entering the glory and have our tears wiped away (in the Millennium). Correction is a major theme in Revelation. We must be made more aware of this truth. “The time has come for judgement to begin at the household of God and, if it begins with us, what will the end be of those who are rejecting God's good news” (1Peter 4:17, Williams)? This is more relevant today than ever before. Although Revelation reads like science fiction, with Hollywood-type aliens rearing their heads, God chose to use strange symbolisms for our benefit. The beast, for example, is a person or persons, according to context, who exercises a ‘beastly’ nature towards the people of God. Thus, Jesus called Herod a fox because he was sly, hypocritical and couldn’t be trusted. A beast with seven heads represents the same beastly nature dominating the governmental philosophies of seven separate kingdoms or eras. Horns indicate power. The spirit, within the woman sitting on the beast (Revelation 17), has been the archenemy of God’s people for millennia, to whom Israel has had to bow 7 times but, in the time of the end, Israel shall prevail (Genesis 33:3, Jeremiah’s prophecy of “Jacob’s trouble”, Jeremiah 30:1-11). God renamed Jacob, the son of Isaac who was the son of Abraham, Israel because Jacob was given power with God (Genesis 32:28). “And he carried me away, in the Spirit, into a wilderness: and I saw a woman sitting upon a scarlet-coloured beast, full of names of blasphemy, having seven heads and ten horns. And the woman was arrayed in purple and scarlet, and decked with gold and precious stone and pearls, having in her hand a golden cup full of abominations, even the unclean things of her fornication, and upon her forehead a name written, MYSTERY, BABYLON THE GREAT, THE MOTHER OF THE HARLOTS AND OF THE ABOMINATIONS OF THE EARTH. And I saw the woman drunken with the blood of the saints, and with the blood of the martyrs of Jesus. And when I saw her, I wondered with a great wonder” (Revelation 17:3-6, ASV). She wantonly calls herself a queen but God will bring her down into the flaming pit (Revelation 18:7). The mystery of Babylon has religious origins which shall be discussed in a forthcoming book, “End Times Wisdom”. Fear of having to deal with symbolism should therefore not deter readers. To give us a head start, the book of Revelation sometimes even interprets its own symbolism. For instance, "The waters that you saw, on which the prostitute was seated, are peoples, multitudes, nations and languages” (Revelation 17:15, Williams).

After Charles was filled with the Holy Spirit he had his first vision about the horrors facing unbelievers. In response, and fearing for his family, he began to soak up the Word of God ‘like a sponge’ under the instruction of amazingly dedicated Bible teachers, over a period of more than 40 years, which is reflected in this book. He is very concerned about complacent Christians presumptuously resting on God’s mercy and benefits unaware that God’s promises are always conditional depending on repentance. He became particularly interested in end-times, in the unity promised by Jesus in John 17 and in the prophetic days of the creation. God has given him the gift of interpreting the symbolism, used in the prophetic scriptures, which he hopes readers will appreciate. The prophetic elements in the life of Samson and the Temple of Solomon, elaborated in this book, will be new to the church.

Charles is a retired Australian academic (BSc Hons Melbourne, PhD in biophysics, Tasmania). Once he reduced his activities in sport Charles became a dedicated researcher believing that physics and chemistry would explain everything about life. He worked in university locations in Canberra, Melbourne, the UK and the USA, but everything changed when he was born again in 1976. Charles stirred up a nation-wide hornet’s nest, amongst academics and school teachers, in the 1980’s, when the daily newspaper “The Age” published his lengthy letters to the editor coining the term that “evolution theory is a cancer”. His academic colleagues, at university, -were horrified and verbally threatened to make his life difficult which became a fact of life for many years. During those years he co-authored a simple book "The Bible and Science", with the Rev Dr. Jeff Hammond (Harvey), who translated it into Indonesian. In Indonesia it became popular.