A rare glimpse at a German Jewish family through the letters they wrote their son, sent alone to America at age 16, and the new lives they built. 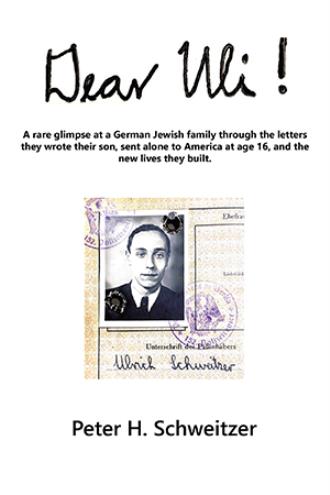 Life is full of choices, some thrust on us, others of our own making. Sometimes the consequences can mean the difference between life and death. DEAR ULI! is the story of trauma and resilience told through letters to Uli, sent alone to America at age 16, from his family in war-torn Europe. A treasured family collection of more than 750 letters narrates the lives of one German Jewish family, and their anguish, fear and optimism. In 1937, Uli left Berlin and arrived in New York City where he forged a new life for himself. On the other side of the world his twin sister, Isa, and their parents endured the oppressive Nazi regime that culminated with Kristallnacht and Papi’s imprisonment. He was among the fortunate who were released, only to face an uncertain and fraught future. The letters and documents evoke images of this family’s life and the world around them over the course of the war and beyond.

As a rabbi and social worker, Peter Schweitzer brings a unique perspective to understanding his family’s history and experiences. A respected collector of ephemera pertaining to Jewish Americana, he has a special appreciation for the letters and documents that his family preserved, which inspired this book. Rabbi Schweitzer is Rabbi Emeritus of The City Congregation for Humanistic Judaism in New York City, which he led for 25 years. He also earned a Master’s in Social Work and worked as a clinical social worker for many years for JBFCS in Brooklyn. Rabbi Schweitzer is the author of The Liberated Haggadah: A Passover Celebration for Cultural, Secular and Humanistic Jews and The Guide for a Humanistic Bar/Bat Mitzvah. He was the regular contributor to Moment Magazine’s “Ask the Rabbi” column from the Humanistic perspective. Additionally, for 25 years he amassed one of the most significant collections of Jewish Americana that he donated to the National Museum of American Jewish History in Philadelphia in 2005.