The Hunt for the New York Ripper

by Lawrence A. De Graw 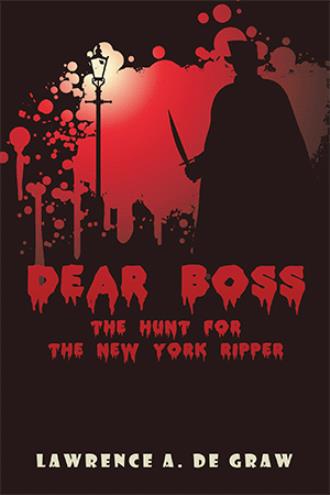 The heinous villain listened carefully for old Tabor’s footfalls even as the old man approached nearer, nearer to his place of crouching. Then he lunged forward, in an instant clapping a large hand over the old man’s mouth and stifling all sound before its very pronouncement. Now with a grunt and a tug of brute force did he strong-arm the elder victim back, back, back into the leafy overhang of the shadowy garden courtyard, quickly placing the long and slender knife just at the man’s throat. Then would come the Ripper blade and slice of death; then would he feel the biting edge of the knife cutting deep—once–twice—slicing cruelly with a left-to-right swipe from a practiced hand, followed itself by a horrid outpouring of blood. And yet few saw a thing and none saw all. The frail mass of the old man’s form had already begun slumping to the ground heavily, slipping like a dead weight that the killer now simply let fall almost where it had stood; and all without sound, without resistance or note of interest by any nearby; and much of it without remorse. DEAR BOSS, the blood-thirsted rogue muttered to himself, much with an evil contentment that spoke volumes unto itself, this as he coolly reveled in the raw effusion of blood, almost savoring the man’s faltering last breaths. Then he set about the gruesome task of laying out the scene, stepping carefully through the several ritualistic labors that he had set out for himself. All of which he seemed to now so richly enjoy, even in his plaguing sickness: the horrid tasks of lavishly abusing the corpse, staging the kill scene and adding his own “signature” placements; and all of it a macabre collection of tricks and hallmark rituals that would only later allow him to relive each crime in full much at his leisure. And in the wake of the killing had the man left only the words: “DEAR BOSS: I ripped this goat for sport and folly; Expect another just for jolly. A feast of carnage with each man. Look to catch me if you can. Signed, Red Jack”

A heinous and blood-thirsted killer is on the loose in New York City and targeting a certain demographic of men. At end, he will claim the lives of seven men, six of whose very killings directly mimic those of Jack the Ripper of Whitechapel, London fame. The “types” of slayings, the manner of death, and even the very “initials” of each victim's name all closely mirror those found slain at the hands of Red Jack in 1888. So, who is behind the slashings, and why are they even occurring? The city’s best Major Crimes Unit is already on the case, along with a Medical Examiner and an embedded reporter, now all in a race against time to find out the very who and the why behind the bizarre series of crimes. Can the investigative team crack the case before more victims fall to the Ripper's blade? Dark and deliciously evil, with villainy run amok, the novel is a bloody nail-biter that doesn’t let up and doesn’t let go; the ultimate in whodunits that will have you shrieking but coming back for more! Better fasten your seatbelts and don your sleuthing hats, then prepare for a roller-coaster drop and the most harrowing ride of your life: “DEAR BOSS: The Hunt for the New York Ripper”.

Lawrence De Graw, born in the Bronx, NY, is a prolific writer who enjoys penning suspense novels most centered on international intrigue and “techno-thrillers” that are set to keep the reader on the edge of their seat and wanting more. After his years in the military, with 55 months spent overseas in both Korea and Okinawa, he returned home to pursue a formal course of study in East Asian Studies and Nipponology. From there, he launched a rewarding career in the IT industry as a Senior Corporate Technical Writer working in the Wall Street area for 23 years. When not pursuing his own creative writing objectives, he now makes his home in Ocala, FL, where he enjoys a wonderful family life and spends much of his time as an avid Naval Historian studying the many Pacific naval battles of WWII and frolicking in the backyard with a rowdy pack of Chihuahuas and apparently loving every minute of it.