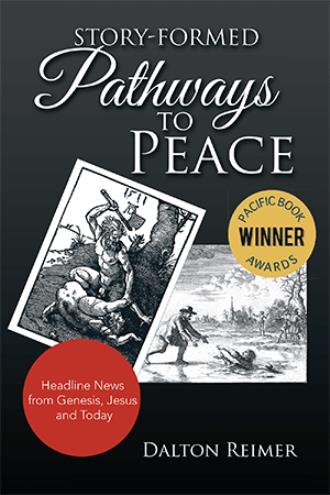 Story-Formed Pathways to Peace calls readers to action around a single vision—making peace a reality. It draws on the unexpected power of stories to transform the world. In particular, this work draws on the Genesis family stories, which have been formative in all three of the major monotheistic, Abrahamic religions of our world, as Jesus, too, has been regarded as a great teacher (Judaism), prophet (Islam) and Savior and Lord (Christianity). But whether religious or not, these stories challenge all to walk pathways to where peace is at home, whether in families, communities or nations. As seen through the lens of conflict and peacemaking, they extend the wisdom tradition of sacred texts. This book not only revisits the stories of Genesis and Jesus, but also it connects those ancient stories to the realities of today’s world. Cain murders his brother Abel. So conflict begins, not with enemies, but those closest to us—our families. Alternative resolutions to conflict, too, begin with the family, prompted in Genesis by Cain’s defensive, moral question: “Am I my brother’s keeper?” People have answered that question differently over the years. Unlike Cain, Abraham chose the pathway of separation; Jacob chose conciliation (to be distinguished from reconciliation, as frequently misinterpreted); Simeon and Levi chose genocide (in response to the rape of their sister); and Joseph and his brothers chose forgiveness and reconciliation, though it took almost forty years. When we step back and consider all these stories together, we see the range of options presented in the biblical narrative. Parallel stories from our time further illuminate and confirm the universal wisdom and applicability of these ancient stories. Jesus inaugurates a second “genesis.” He, like Cain, first experienced conflict in his family of mother, father, five brothers and several sisters. But Jesus’s enlarged vision also included neighbors and enemies, with further alternatives for working with each. Here the progression from family to neighbor to enemy, embedded in Jesus’s Sermon on the Mount, provides a larger picture of possibilities, though usually not recognized in full. In all, these ancient stories are narrated throughout, linking past and present in search of wisdom for working with conflict in our time. Dalton Reimer is the co-founder and former co-director of the Center for Peacemaking and Conflict Studies at Fresno Pacific University, established in 1990. Earlier, in 1960, he joined the faculty of what was then Pacific College, now University. His first field of teaching was communication, which expanded in later years into peace and conflict studies. He has served the university over the years in various capacities, including nearly two decades in academic administration as dean. Simultaneously, he has served in varied leadership roles in the church, both locally, nationally and internationally. After beginning his journey toward retirement in 2002, Reimer continued his work with the Center for Peacemaking with a particular focus on international peace education development. Along with developing peace educators from a variety of other countries, he has also taught and lectured in institutions of the church and higher education on five different continents. He is the co-editor of Christian Conflict Resolution, a reader in the Russian language published in St. Petersburg, as well as contributor to several other works. He earned his bachelor’s degree from California State University, Fresno, and masters and doctoral degrees from Northwestern University in Illinois. 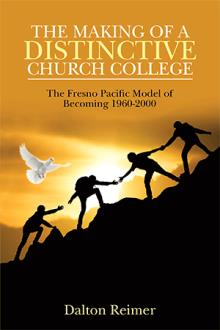 The Making of a Distinctive Church College
Dalton Reimer
$17.99

The Book Story-Formed Pathways to Peace calls readers to action around a single vision—making peace a reality. It draws on the unexpected power of stories to transform the world. The stories retold here have resonated through the ages not only with those religious but also with thinkers, artists, musicians, and others who have seen in them universal patterns of behavior. Now retold with commentary as seen through the lens of conflict and peacemaking, they illuminate pathways to peace as relevant today as when first told. Each chapter is fronted with imagined headlines of the ancient story with actual parallel headlines from the present, thus highlighting this connection of past and present. It is then in going back that pathways toward peace are illuminated for the present and future. The wisdom tradition of sacred texts is hereby extended.

The Author Dalton Reimer is a peace educator in the mode of the traditional storyteller. Professionally, he is professor emeritus, former academic dean, and co-founder of the Center for Peacemaking and Conflict Studies at Fresno (California) Pacific University. As an extension of his university involvements, he has retold selected stories of this work with commentary in educational and public settings on five different continents. Using the medium of stories already embraced by a significant portion of the world’s population, he has challenged his hearers with new insights as he has examined these stories through the lens of conflict and peacemaking. This book is another step in a journey of nearly three decades interpreting and sharing these stories.