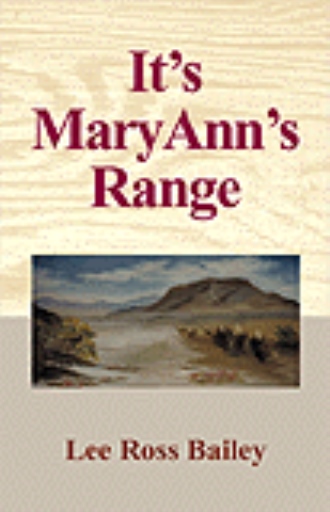 The following is a brief summary of a story entitled, "IT'S MARY ANN'S RANGE."  The manuscript consists of an action-oriented plot throughout the storyline.  It's a narration of action, with blended legends of Western lore.  It's a storyline of programmed scenarios of romance, which are clearly defined to give balance to the storyline.  The heroine has her own dominant viewpoint, providing the hero his own strong character to compliment her and the plot, with clues purposely placed in the outset of the storyline.  From chapter one through to the conclusion, the reader will

The heroine of the story is a beautiful young blond-headed school teacher approaching thirty.  She was blessed with a slender, well-formed figure, the full length of her five-foot-six stature.  Mary Ann was stylishly dressed in the latest fashions of New York City.  She lived with her widowed father, Jim Stevens, a noted railroad tycoon, and a housekeeper, Mary O'Brian, whom she fondly calls Mums, in a magnificent brownstone mansion located in New York City's elite district called Park Avenue.  This story takes place during the late 1800's and the early 1900's.

Mary Ann was raised by both her father and Mums from

the early age of six, when she lost her mother due to the difficulty of childbirth when she was born.  Mums did

more than her share to be a mother to her, as though she had been her own flesh and blood.   Mary Ann recalled the yesteryear legends of the West when she wrote her journals  for this story entitled, "IT'S MARY ANN'S RANGE."

Coming out West with her father, who was a railroad magnate, was a honor in itself.  He had assured her this trip would be a new, unforgettable experience, planned in detail.  Already, Mary Ann was enjoying looking at the colorful valleys and somber landscapes adorned with scenic white puff clouds from the wide windows of the pullman.  These slowly moving clouds were drifting lazily around Wyoming's picturesque craggy Sawtooth Mountain Range, sharing the blue sky and space with the approaching town

where her father was taking her for the surprise vacation he had promised.  He was proud to be in the position of mixing his business trip with her company.

In the meantime, the steam locomotive was slowing down its speed and was now chugging slowly along, preparing to stop at the passenger loading and unloading platform of the railroad station.  Later, it switched their private pullman coach over on a siding near the depot.  This specially designed pullman, with its comfortable furnishings, would be used for their summer cottage.

It was during this summer vacation, while school was out, that she met and fell in love with a young rancher by the name of Bob Davis, a handsome young man in his early thirties, muscularly built, browned by the sun, like rawhide whipped by the prairie winds during the grandeur of the four seasons.  Though appearing somewhat naive, Mary Ann's charms swept him off his feet, allowing her to achieve her attainable dream -- the man of her choice.

For their wedding present they were given the Double D Ranch, which consisted of more range land than any of the other ranches in the Wyoming territory, by Bob's parents, because they had decided it was time to retire and move into town.   One year later, Bob and Mary Ann are blessed with the birth of a healthy baby boy, who they named Jim J. after her father.

Years pass, then Mary Ann and Jim, who had recently

graduated from high school, were confronted with Bob's sudden death, caused from a weakened heart, which is a scenario in itself.  Mary Ann, who finds herself unable to cope with the loss of her loved one, turns the running of the ranch and its operation over to Bob's nephew, Steve Andrews.  Mary Ann and Jim packed up and moved bac

Author Lee Ross Bailey has moved around some acquiring knowledge from NATURE, the SUPERB, and the HUMBLE. Born July 3rd, 1917 in Glendive, Montana, reared in Iowa, and later lived in Oregon and Utah. He now lives in Corona, California with his wife, LaVonne. Telling was a motivating factor when he wrote this western entitled, “It’s Mary Ann’s Range.” This story created the desire to make up for those lost years of writing time with other stories, too.