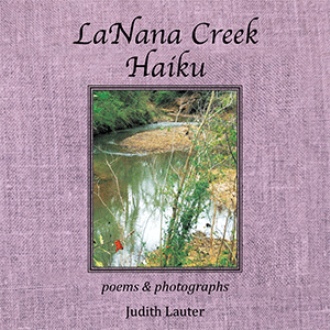 An error has occurred. Please try again or contact our customer support team.

In LaNana Creek Haiku, poet and neuroscientist Judith Lauter offers a photographic and poetic account of life along a forest creek that flows through the Deep-East Texas Pineywoods in and around Nacogdoches TX. The forest is a place of extreme quiet and intensely private moments – of slow-moving water and towering pines, of filtered light and flowing, humid Gulf air. We might expect the poetry that grows from such a setting to evoke a sense of peace and serenity – and the haiku paired with artful color photographs in this book do just that. A set of informative end-notes complements the poems and photographs with factual details about the creek and the unique natural areas through which it runs.

Judith Lauter (JudithLauter.com) was born in Austin, Texas. When she was nine, her family moved to Michigan where she later met her husband, the poet Ken Lauter, in a poetry-writing seminar at the University of Michigan taught by Donald Hall (US Poet Laureate, 2006-7). The couple has subsequently lived in Arizona, Colorado, Missouri, Oklahoma, and now make their home in Nacogdoches TX. Judith holds a BA in English literature, three master's degrees (creative writing, information science, and linguistics), and a PhD in communication sciences (Washington University in St. Louis). She taught and directed human neuroscience laboratories at major universities for more than three decades, before retiring in 2012 and returning to her first love, poetry. In addition to scientific articles, chapters, and books (including How is Your Brain Like a Zebra? Xlibris, 2008, ZebraBrain.net), she has published poems in a number of journals, and won two Hopwood Awards for poetry (University of Michigan), an Academy of American Poets prize (University of Denver), and the Norma Lowry Memorial Prize (Washington University). Her photography has been compared to Eliot Porter's. She has six previous books of poetry-and-images with Xlibris: A Year of Haiku; Light from the Left – poems on paintings by Rembrandt (LightFromTheLeft.com); Sonora Spring Haiku; Pineywoods Summer Haiku; Rockies Autumn Haiku; and Coastal Bend Winter Haiku.