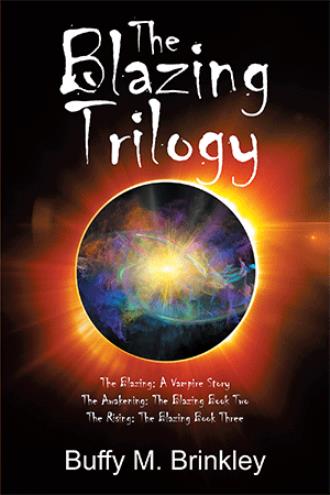 Excerpt from The Blazing: A Vampire Story: Richard watched as Malcolm’s eyes changed color from hazel to silver. His pupils grew large. Malcolm opened his mouth to reveal his own elongated canines. “Richard, we must feed.” Malcolm lowered his head to the girl’s throat, opening his mouth around her skin and biting down. The girl seemed to relish in the act, her body pressing against Malcolm in a strange sexual dance. Richard could hear the girl’s heartbeat, quickening at his first taste of her skin and then slowing until it had stopped. When at last Malcolm had drained her, he released her body, and the girl fell dead to the floor. He then approached the second girl, who had not seemed to notice anything strange; and taking her hand, he led her to Richard. Richard was drawn to the girl like a moth to a flame. He drew her into his arms as Malcolm had done and positioned himself against her for the best angle possible of her throat. He was just opening his mouth to take the sustenance she would provide when he saw Malcolm drive his hand into the other girl’s chest and pull out her heart. “What have you done?” Richard asked, his voice full of alarm and disgust. “You mustn’t allow them to return, Richard. When you drain them, they will return if their hearts or heads are not removed. I will do this for you tonight, but you must learn to do it for yourself.” “I can’t kill her!” “You must feed, Richard, or you will die.” “I can’t kill her!” “That is just your human conscience, Richard. Ignore it.” “I can’t!” “You must feed!” Malcolm’s voice had become fierce, his eyes ominously luminous. “And if I don’t drain her? Will she be all right?” “You must take all you need, Richard. She will sustain you for days. You need to take her.” “If I don’t kill her, will she return? Answer me,” Richard demanded. He could feel himself losing control. A darkness was rising within him, and he knew if he didn’t take control now, he would never have control. “No, she won’t, but you must do it, man.” The darkness was near. Richard used all his strength to hold on to himself. He could feel his sharp canine teeth against his lower lip. He brought his mouth to the girl’s throat and bit down. Life flowed into his mouth, and he was both elated and disgusted by it. The vampire delighted in the blood, while the man was repulsed. Neither the vampire nor the man was strongest, and both warred for dominance within him. The girl in his arms seemed to be lost in pleasure he couldn’t fathom. Blood flowed seemingly ceaselessly down his throat, and he took all he needed. Hearing her heartbeat slow, he lifted his mouth from her neck and laid her gently on the bed. The girl was still breathing. The wound on her neck was already clotting. He looked down at her with his newly sharpened vision and listened to her breathe with his newly enhanced hearing. Everything about his body was growing stronger. He felt Malcolm approach from behind him. “In a day or two, her body will have restored the blood you took, brother. Then you can feed on her again. You should drain her next time. No explanations are due when they disappear, Richard.” Malcolm patted Richard on the shoulder and gave a short laugh. Richard brushed Malcolm’s hand aside harshly and turned to look at him. “I will never be this! I will not be a monster!” “You’ve no choice, Richard. It’s what you are, brother.” “Never call me that again, Malcolm. You are not my brother!” “Do you not see the gift Alyssa has bestowed? We will never die.” Richard’s heart grew heavy with the weight of Malcolm’s words, and he sat on the bed next to the sleeping girl. “Why? Why did you let her do this to me?” Richard felt sick at heart and soul weary. “Why?” He looked up at Malcolm with such sadness in his eyes that Malcolm turned his head away from him before answering. “She was leaving, Richard. I would be alone, brother. I could not bear to be alone. And you are the only friend I have.” Richard sat, shell shocked and unbelieving at what his life had become. Then a story he’d read in April of that same year sprang to his mind. A man named Polidori had been published in London’s New Monthly Magazine. Polidori’s short story was about a nobleman named Ruthven who seduced young women and sustained his life with their blood. The story was called “Vampyre.” Richard had read the story with horror in his heart and had suffered a few nightmares after. Richard knew then that, despite all the magazine’s disclaimers that the story was a work of fiction, it was of a real being. Even if Ruthven never really existed, the vampire did. “What are we, Malcolm?” “Alyssa said we have many names.” Richard rose from where he sat and moved toward the door. “I must go. I must find a cure. There must be one.” “Richard! I can’t bear to be alone, Richard. Please, brother,” Malcolm pleaded. Richard turned back toward Malcolm. “Come with me then. Help me reverse it.” “There is no cure, Richard.” “There must be! If it can be done, it can be undone!” “No, brother. It’s too dangerous, and you wouldn’t survive.” “Then there is a cure.” “Too much must be aligned for it to work. It’s impossible.” “Tell me.” “The blazing isn’t possible.” “How do you even know of it then, Malcolm?” “Alyssa told me of it. It’s a legend amongst our kind. But too much is required.” “What is required, Malcolm?” Malcolm sighed and approached Richard to lay a hand on his shoulder. “You will need a very special woman, a dream walker. And that, my friend, is just the beginning.” 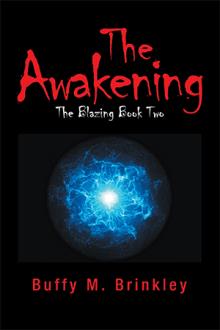 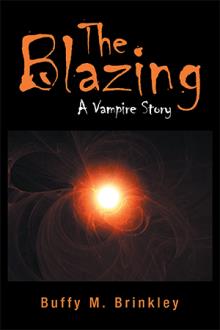 THE BLAZING Richard is a vampire. Viveca is the dream walker warrior who can save him. The Blazing is the cure, but it comes with a terrible risk. Can Viveca and Richard find a way through it without it costing them their lives or the love they have come to share? THE AWAKENING Richard is human again but Viveca sacrificed so much to save him. Can she find a way back to the warrior she once was? Forces of darkness are gathering in number and an enemy awakens. Can Viveca and Richard find the strength they need to fight it? THE RISING Viveca might lose Richard. The vampire returned and now there are two spirits at war within him. Something is happening to Richard. The rising is upon him and it comes with a power he must learn to control if he’s to protect everyone he loves.