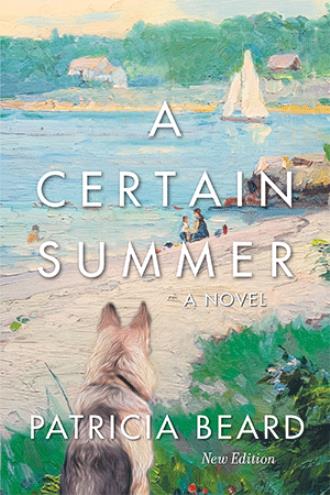 Nothing ever changes at Wauregan…

That is the mystique of the idyllic island summer colony, the comforting belief its multi-generation families have lived by for half a century. But in 1948, after a world war has upended countless lives, it is not certain that the islanders will be able to return to “the old days”—and for Helen Wadsworth, the war is not over.

Helen’s husband, Arthur was declared missing in action during an OSS operation in France, and she is unable to find out what happened, or whether he might, even now, be alive. Raising a teenage son, who, like his mother longs to know the truth, Helen turns to Frank Hartman, her husband’s best friend and his partner on the OSS mission on which Arthur was lost, while Frank escaped. But Frank seems more intent on filling the void in Helen’s life, which Arthur has left than in answering her questions.

And then Peter Gavin, a young Marine who was captured and tortured by the Japanese returns to the island with his faithful war dog; and man and dog enter the lives of Helen and her son.

Unsure of whom to trust, or what to believe, Helen takes matters into her own hands. As she seeks the truth, she makes a shocking discovery that will alter the course of her life, and change her perceptions of love and war.

A mystery, a love story and an insider’s view of a private world, A Certain Summer resonates long after the last page is turned.

“Equal parts novel of manners, historical fiction, and a quiet examination of social mores, A Certain Summer weaves important questions about class, gender, trauma and family through its seemingly simple narrative as artfully as an experienced hostess arranges the seating at a dinner table, so that conversations flow….But Ms. Beard shows that even magical retreats like Wauregan are subject to the vicissitudes of the modern world….In the end…it seems that Wauregan’s magic prevails in its very ability to change in a way that stays true to its origins, or even more precisely, that magic prevails as Wauregan learns it must change to stay true to its origins.”

“Woven into this tale of loss and romance are themes of intrigue, growth, betrayal, psychological trauma and a fulfilling healing process. Beard’s attention to historical details and understanding of the realities and shortfalls of privilege make a satisfying read.”

PATRICIA BEARD is the author of eleven non-fiction books. A Certain Summer is her first novel. She has written hundreds of nationally-published magazine articles; and is a former features and contributing editor at Town & Country, contributing editor at ELLE, and style features editor at Mirabella magazine. She and her husband live in Dutchess County, NY, with their two dogs.

Summer places have always been a special part of Patricia Beard’s life. She spent her early years at a small multi-family lakeside compound in Maine; and A Certain Summer is based on an island where Beard enjoyed the kind of simple life she describes here when her own children were small.

Beard’s indelible memories inspired her to write A Certain Summer. The book celebrates places where the members of the community treat each other with decency, respect and friendship, despite currents of discord and intrigue; and through tragedy and danger. patriciabeardbooks.com