No Worldly Options Except Suicide or Schizophrenia

But God Has His Own Plans 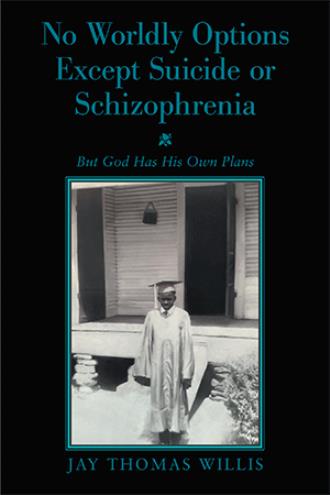 Carl thought Jason was like his other two brothers who had mental health issues and consid-ered that he should be committed as they were. In fact, all his brothers had mental health issues, some more severe than others. Jason’s brother Carl called his mother and his other sisters and brothers and told them Jason should be put away. Jason wasn’t doing anything, but his own brother decided he should be committed on General Principles. Carl said Jason had all that college and couldn’t find a job. Part of the rea-son he had difficulty finding a job was his brother didn’t have a telephone so that a potential employer could possibly call him if he wanted to hire him. The only way a potential employer could reach him was to write a letter, and most employers preferred to call about a possible interview. His sister later told Jason about Carl’s calls. Jason figured no matter what one of his brothers did or had done; even if he was destruc-tive, dangerous, or malicious; he would never try to get him committed. Lewis, who had been afflicted with mental health issues also, came to school where Jason was studying, and told his professors, he should be com-mitted. Lewis said Jason was going from school to school, wasting his time, not getting any kind of a de-gree. Lewis was probably acting on Ken’s suggestion. His brothers knew nothing about his situation. They were going on what was floating through the grapevine. The professors asked Lewis, when was the last time he saw or talked to Jason? He said he hadn’t seen him in several years. At that point the professors knew something was badly wrong with Jason’s family. They told him that you couldn’t commit someone you hadn’t seen in several years, and if he didn’t leave the school, they would commit him. Even with all that negativity going around, they still allowed Jason to graduate with his class. The oldest brother, Ken, was sneaky and un-derhanded. Jason knew he was also trying to help get him committed. He did a lot of things behind the scenes to get Jason committed. Jason was not sure what all Ken didn’t do, trying to get him committed. Ken mainly kept talking to Jason’s parents about committing him. He talked until they would no longer listen. Ken was jealous of Jason, because Jason had a chance to go to college, and he didn’t see that option. One day Ken was talking to their mother. He said, “That boy isn’t worth the salt in his bread,” act-ing self-assured and knowledgeable as always. “He’ll be OK,” his mother said, feeling that her youngest son would somehow find his way. Jason’s mother had some problems, but she was still proud of his going to college, especially con-sidering that only a few of them had graduated high school. “He keeps going from school to school without getting a degree. He needs to get a job and help sup-port the family.” Even though none of them had helped Jason in college, Ken felt that Jason, after graduating college by hook or crook, should now get a job and help the family, instead of pursuing his own ambition. “We’re doing OK,” his mother said, even though they had always struggled just to put food on the table. Jason always did have sympathy for his parents. They still existed in that tin-roof shack in the middle of nowhere. They finally got a telephone and indoor plumbing. By this time that shack was about to fall from around them and from its rock foundation. But Jason felt he had to look after himself, because no-body else was going to do it for him. “You know Mother, as well as I, that he needs to be committed,” Ken said. All the people in Jason’s family were always busy trying to divert attention away from themselves. If that meant committing someone else, then so be it. Ken did not have schizophrenia to Jason’s knowledge, but he could be violent at times. He car-ried a .38 Special and a sharp pocketknife and was known to cut and shoot any number of people. Ja-son’s father even said he had killed a few people. Ja-son was leery of him. “That boy is doing all right; leave him alone,” his mother had reached the inevitable conclusion. Jason’s mother was getting protective of him in her old age; something she should have done when he was much younger. “He’s going to be just like Carl,” Ken said. Carl had spent a lot of time in state mental hos-pitals. Some of the family thought Jason should be committed now because it was inevitable and get the problem out of the way. Most of the family felt Jason would need hospitalization sooner or later. This was in 1973. All the family were surprised that Jason had managed to escape a state mental hos-pital for all these years. He never actually spent any time in a psychiatric facility, except for the two months in the Navy before he was discharged. Most of his brothers and sisters knew nothing about him and didn’t know whether he had mental health issues or not. They all lived within three-hundred miles away, but rarely came to East Texas. The family didn’t have a telephone during the early days, and they hardly ever wrote each other a simple letter. In addi-tion, most of them had left home when Jason was a toddler. They treated those miles as if they were on the other side of the world.

This is a novel about two boys who grew up in a rural area of East Texas. Neither of them had telephone, gas, or plumbing until later in life. They did get electricity by the time they entered first grade. Their early education was designed to poorly develop them. In addition, they both had schizophrenia as a strong genetic factor in their family’s history. You might say they both started from behind the eight ball. They both grew up with, according to their background, limited potential They moved beyond this potential to become moderately successful. The novel follows them from childhood through adulthood. It demonstrates that two boys who probably had no options except suicide or schizophrenia did do as well as anyone could be expected. God truly has His own plans.