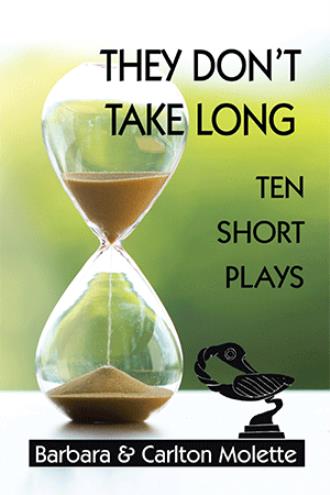 Over the years, this question has been asked repeatedly and persistently: “What inspired you to write this play?” Here are some answers: In 2008, we joined a group called Working Title Playwrights that offers its members the opportunity to hear actors perform readings of segments of their scripts followed by a critique session. Betty Hart, who often served as moderator, ended our August 16, 2010 critique session by mentioning our next meeting was on Labor Day and suggested we could honor the occasion by doing ten-minute scripts with Labor Day themes. Although we began writing plays collaboratively in 1969, in August of 2010, we had never written a ten-minute play.

After the critique session, I told Barbara: (1) I did not want to deal with an externally imposed theme. (2) I did not believe ten minutes was sufficient time to develop interesting characters or plot. (3) Getting folks to join hands and sing Kumbaya is not our style. In our casual conversations, Barbara often expressed a “what if” that exposed an event’s unconventional, unorthodox, or irreverent facets. As we talked about American industry’s dependence on Eurocentric concepts of time and the hypocrisy of claiming to honor workers while requiring them to punch a time clock, we realized we had the basis for a ten-minute play. The script received an enthusiastic response from our fellow playwrights, one of whom asked if we had sent the script to any ten-minute-play contests. Only then did we discover ten-minute play contests are a thing. We explored the Dramatists Guild’s resources, submitted the script, and surprisingly, soon found ourselves at a small theatre in New York’s Broadway theatre district attending the premiere of our first ten-minute play, OUT OF TIME.

The impetus for WIDGETS came from a Steampunk festival’s request for plays. Since we did not know what Steampunk was, we searched the web and discovered it is a 20th century science fiction genre inspired by 19th century steam-powered industrial machinery, technology and aesthetic design. Having lived in Connecticut, we were familiar with factories built beside rivers with dams to harness water for power. Some such buildings have been re-purposed. Others remain abandoned. Did the “new technology” of steam power force these factories to close? Did the workers have to be fired? Are “new technology” and “progress” the real reasons factories get closed and workers get fired?

A FOND FAREWELL began with a casket. A theatre company said they wanted short plays that use a casket as a prop. We began by describing the deceased man in the casket. That led to a grieving wife. Then there were two wives– a first wife and a trophy wife. The wives have different opinions about the man in the casket and what he wanted as his fond farewell. But things change when another character unexpectedly appears.

DO YOU CARE ENOUGH? was inspired by recollections of applying for a job. It was 1959, and the times were allegedly changing. Armed with a college degree and some experience and skill as a writer, I applied for a job. State law required separate schools for Negroes when I attended public school in the city where the job was located, so the schools listed on my application left no doubt about my racial identity. When the company granted me an interview, I thought maybe the times really were changing. The interviewer scheduled a time for me to return and be notified of their decision. A week later, I returned as scheduled and they offered me a job. Not the job I had applied for, but one they apparently deemed appropriate for a Negro college graduate with demonstrable writing skills. They offered me a job as a bus boy in their cafeteria. But this play is not about me, it’s about the ability of corporate culture to change people.

MOVE THE CAR was inspired by a theatre located in the heart of NASCAR country planning to present a group of plays under the title CAR CRAZE. We wondered, “Why do Americans love cars?” and decided to consider a real but seldom discussed answer– they provide a place to have sex. The theatre presented the premiere and recommended the play to another theatre generating a second production.

TEE-SHIRT HISTORY happened when Atlanta’s Essential Theatre sought short plays about Atlanta locales to present under the title THE LOCAL. Barbara envisioned an elderly African American gentleman objecting to a tee-shirt because the key phrase in Martin Luther King, Jr.’s best known speech is incorrectly quoted on it. The elderly gentleman and the young tee-shirt salesman are at the locale because a Martin Luther King, Jr. Birthday event is taking place nearby at the place in Piedmont Park that was the site of arguably the best known and most frequently studied speech by an African American prior to Martin Luther King, Jr.’s “I have a Dream” speech– Booker T. Washington’s 1895 “Cast Down Your Buckets Where You Are” speech.

THE GREAT XMAS RACE, also inspired by Essential Theatre’s request, was provoked by Atlanta’s prideful claim to have the world’s busiest airport. Our sense of irony led us to ask, What if it’s the second coming? What if a television reality show is a race and all the contestants have the last name King? What if the contest promises fame and fortune for the first three Kings to reach Bethlehem with a gift? When the trip to Bethlehem passes through the Hartsfield-Jackson airport, what could possibly go wrong?

SILVER TONGUE was inspired when a theatre published an image of an “old school” microphone and asked for plays that use such a microphone as a prop. The theatre company’s solicitation came during the 2012 election campaign. By October of 2016, new political campaigns inspired revisions. When a theatre sought plays inspired by an image of a swarm of rocket ships in flight, it reminded us of a Derrick Bell novel. Visitors from another solar system promise to depart in peace if they are allowed to take all the Black people with them. Our “What if?” begins with twins– one twin “looks Black” and the other “looks White.” Social scientists say, “Race is a social construction.” Can a play help people cope with the significance of what this statement really means? Since race is far more ambiguous than many believe, when those in political power are required to make irrevocable and life-altering decisions about racial identity, they commission a machine that purports to resolve all racial identity dilemmas. Are theatres willing to confront their audiences with the thorny issues of how ambiguous race really is? Houston’s Fade to Black festival premiered KIN SHIP in 2014.

OUR DREAMS began when a friend asked us to create a play for a Martin Luther King, Jr. Day event at a state university. One of that state’s most powerful elected officials was scheduled to attend, and our play was not what our friend wanted for that occasion. As I said earlier, “Getting folks to join hands and sing Kumbaya is not our style.” Fortunately, the play was still unproduced in 2013 when Houston’s Fade to Black festival solicited unproduced ten-minute plays and decided to produce the premiere of OUR DREAMS, then entitled LAST SUPPER.

This book contains ten plays. Each play takes ten to fifteen minutes to perform. Each can be presented with minimal costumes and props and without theatrical scenery or lighting.

“Out of Time”—A customer attempts to purchase a used watch. But the store’s proprietor is reluctant to sell a watch to someone who does not understand what time is.

“Widgets”—In 1908, a newspaper reporter interviews the recently named Employee of the Year at the World Wide Widget Works.

“A Fond Farewell”—Charlie Burns is dead. His wife and ex-wife do not agree about how Charlie’s fond farewell should proceed. Then Mr. Barber arrives.

“Do You Care Enough?”—Three diverse greeting card executives have a mandate from their boss to devise a new imperative for consumers to purchase cards.

“Move the Car”—A couple married for over thirty-five years hires an auto shop to refurbish a twenty-eight-year-old car and move it into their bedroom.

“The Great Xmas Race”—It’s reality television. It’s the second coming. Each contestant’s last name is King. Fame and fortune await the first three Kings to arrive in Bethlehem and present their gifts. The Kings prepare to board a flight at the world’s busiest airport.

“Silver Tongue”—A political hopeful learns the secret to the father’s success while endeavoring to win the office held by the father for decades.

“Kin Ship”—The Global Union of Nations is sending all the black people to its lunar colony. The Racial Identity Determination Bureau decides who goes and who stays. Twin sisters have appealed the bureau’s decision. The twin ordered to go wants to stay, and the one ordered to stay wants to go.

“Our Dreams (Last Supper)” — A Memphis café staff prepares supper for Dr. Martin Luther King Jr. on the eve of the historic march in support of sanitation workers.