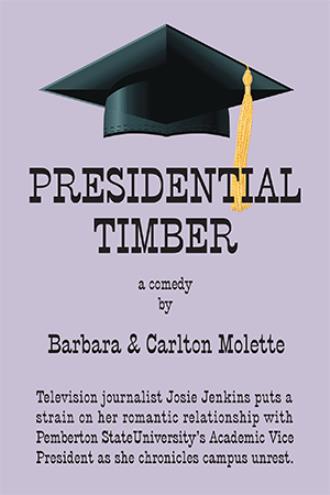 At rise, JOSIE is at the news desk.

JOSIE
In local news, unrest continues to mount at Pemberton State University. A recent audit revealed the financially troubled institution is over a million dollars in debt, and Senator Jethrow Pennywise has introduced a bill to abolish Pemberton State and turn the campus into a minimum security prison. This is the third time Senator Pennywise has introduced this bill. The Senator says his bill enhances the state's ability to achieve its racial integration goals and provide needed space for a rapidly expanding prison population. He also claims that two state universities such a short distance apart is a waste of money. Both universities are located in Senator Willington Spendall's district, and he strongly disagrees with Senator Pennywise.

LIGHTS UP on SPENDALL and SEYMORE.

SPENDALL
Senator Pennywise introduces the same bogus bill every year, stirring up racial discord so the voters in his district don't notice what a sorry job he's doing. Even my pet duck Seymore can see what he's up to, can't you Seymore?

SPENDALL
Pemberton State University has a proud tradition of educating the African American citizens of this state, the nation, and the world. Even Seymore knows that, don't you Seymore?

LIGHTS FADE on SPENDALL and SEYMORE.

JOSIE
The financially troubled institution faces another challenge as a large group of students demonstrate outside the President's office. The demonstrators have made several demands, but the number one issue seems to be the cafeteria food.

STUDENT
(If she is seen or only heard depends upon casting.) The food was always bad. But after Dickman took over, it got worse. HE claims the food is healthier, but we pay too much money to get this [BEEP]. Dickman is a [BEEP] idiot!

JOSIE
A spokesman for the University says complaining about food is a springtime ritual on campuses all across America, and a prominent Board member responded to questions about the deficit by saying faculty positions must be cut. While some of the signs complain about the food, many say "No faculty layoffs." The students say faculty layoffs mean some students cannot get the courses they need to graduate. One Student put it this way:

JOSIE
President Dickman says he has no plans to cut faculty positions, but some recall a previous president making a similar statement in October, and seventeen faculty members got termination notices just before Christmas. Some people who appear to be faculty members are carrying signs that read "FACULTY VOTES NO CONFIDENCE," and "FACULTY SAYS DICKMAN MUST GO."

BUCK
Goddam tee-vee people. Do they show up when something good is happening on campus? They do not! But soon as they smell trouble-- up in our business like flies on shit.

SHORT
Josie Jenkins. The only Black person with a little media influence and she has more bad things to say about...

DAVIS
Some of those signs are professionally made. I don't think our students are the ones...

SHORT
They look way too shabby to be our students.

SHORT
Naw, the clothes. If our students know they're going to be on tee-vee, they are gonna be dressed UP.

BUCK
That sign? What the hell does that mean?

BUCK
The one that says "DICKMAN SUCKS!" Are they talking about oral sex?

Barbara and Carlton Molette, Dramatists Guild members since 1971, began playwrighting collaborations with ROSALEE PRITCHETT, premiered in 1970 by Atlanta's Morehouse-Spelman Players and produced in New York by the Negro Ensemble Company in 1971 and in 2017 for their 50th anniversary season and also produced by the Free Southern Theatre, several university theatres and published by Dramatists Play Service and in the anthology Black Writers of America. They received the Connecticut Commission on Culture and Tourism's Playwright's Award for PRUDENCE in 2005, the Black Theatre Network's Lifetime Membership Award in 2012, the National Black Theatre Festival's Living Legend Award and the Ethel Woolson Award for LEGACY in 2013 and the Atlanta Black Theatre Festival's Legend Award in 2016. They co-authored two non-fiction books, Afrocentric Theatre and Black Theatre: Premise and Presentation. They have also authored numerous articles individually and collaboratively.